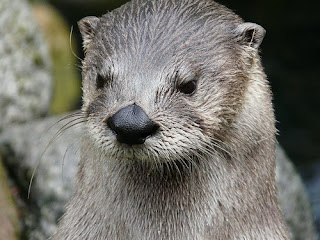 The BBC reports that:
T

An otter has survived a "perilous" three-mile sea crossing to the Farne Islands for the first time, the National Trust has said.

The animal, more commonly found in rivers, has swum from the coast of Northumberland despite rough seas.

Head warden David Steel said he was stunned to find 60 yards of otter tracks on Brownsman Island, which is famed for its bird colonies.

The mammal has not yet been sighted, but it is thought to be still there.

Agitated behaviour by the island's gulls and puffins suggest the new predator has settled in.

Looking for a unique gift this season? Then check out the shop at the International Otter fund website.

The Farn Islands Of Scotland:

The National Trust website offers a lot of information on the Farn Islands. Here is a taste:

It has long been a dream of mine to explore the Farn Islands during birding season. I may not get there soon, but someday I'll see those Puffins for myself.

The Whale and Dolphin Trust tells us that: 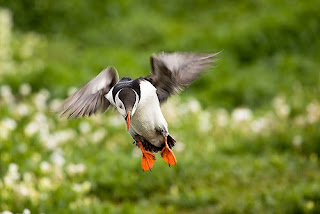 Although otters can often be seen feeding and playing in the sea around the British Isles these are not sea otters but are river otters which have become adapted to a much more marine life. These river otters, which live mostly in the sea are found mainly around the Hebrides and the north west coast of Scotland and are often mistaken for true sea otters (Enhydra lutris). However there are no sea otters in European waters. The otters found in the Hebrides still need to return to fresh water every day to wash the salt out of their fur. Their ears are projecting and cupped unlike the sea otters’ and they have sleeker fur. Their feet have obvious footpads and their back paws are only slightly webbed. The tail is long and pointed and they are very agile both in and out of the water.

Otters are extremely playful and can be seen feeding and playing in the kelp along the shore or in streams running out to sea especially in the morning and evening. They pair up and remain together in territories occupying about 3 kilometres of shoreline. Their young are born in holts near the shore or along river banks. Most litters comprise 2 or 3 cubs and although they are weaned after about 14 weeks they stay with their mother for 13 to 15 months.

Otters have a double coat of hair which they shed throughout the year rather than moulting in a short moulting period. They have very acute senses of sight, smell and hearing and usually detect the presence of any humans long before you get to see them. In order to observe otters it is important to remain at a distance 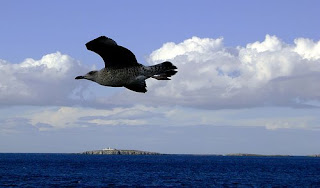 and be quiet and still.

Gull and Farn Islands and by Magicker at Flickr

Can't get enough Puffins? Neither can I. Here is more info on the Famous Farn Island Puffins

Otters at the Various Sea Sanctuaries
Posted by Dj Connell at 8:05 AM