Want A Job? How About Saving the Planet? 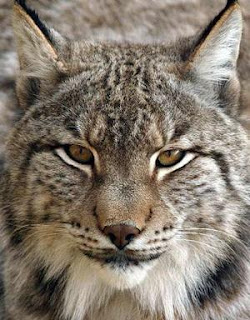 The Iberian Lynx Could Use A Hand...and A Lot More Rabbits: (1)

The BBC reports that "More than 8,000 conservationists and policy makers are in Barcelona, Spain, for the IUCN World Conservation Congress."

The focus at this congress is both broad and deep. It involves not just saving wildlife but changing the way conservation works.

Saving the planet now needs lawyers, economists, engineers, chemists, politicians, as well as those steeped in the traditional disciplines..

The great fields of the green world now contain lawyers, to draft environmental treaties and laws and make sure people obey them. Economists calculate the financial costs of nature loss and the benefits of sustainable businesses.

Engineers work out how to re-invigorate dying watercourses. Communications chiefs look for new ways of getting the word out. Hunters run sustainable trophy-hunting schemes that raise money for conservation.

Gender specialists engage women in conservation in societies where they may not have a lot of power. Entrepreneurs leverage funds - a term you would never hear from an ecologist - for green technologies.

It's a rich ecosystem.

And it's virtually an open door. Just make sure you have a skill to bring, plus the commitment to work long hours for far less money than you could earn elsewhere, [Sia's note: don't a lot of us do that already?] and the environmental family will find a home for you somewhere.

The Daily Green tells us that people who have been downsized are finding jobs in the green sector.

In many ways, Jobson's career mirrors that of the nation. Given Jimmy Carter's historic efforts to promote energy conservation (not to mention that pesky oil crisis), things were looking pretty green, and the U.S. was the world leader in solar power, wind energy and other green tech areas, with hundreds of start-ups and thousands of high-paying jobs. But then Reagan and the go-go, booming, me-generation 80s hit like a bad hangover.

Now, with even more complex energy problems and the growing threat of global warming, clean tech is starting to get another look, on a broad scale. "We're going back to the same principles we should have learned before, and there are business opportunities again," says Jobson.

Wind Jobs, Ecotourism and the Economy:

In Green Inc., Kate Galbraith writes about energy, the economy and the bottom line when it comes to wind power in A Gust of Green Jobs. Meanwhile, the Ecotourism Awards for 2008 were presented. Click on the link to read about the winners.

(1) Lack of Curiosity May Kill Most Endangered Cat

The lynx has managed to survive for so long in Spain in part because it has always shared the Iberian Peninsula with another emblematic Spanish species — the rabbit.

The Phoenicians, the great trading empire of the Mediterranean from 1000BC, named the Iberian Peninsula "Hispania" (Land of the Rabbits) because they found so many rabbits when they arrived.

Why this matters to the Iberian lynx is that rabbits account for 90 per cent of its diet. Without rabbits, the lynx would, en masse, starve to death.

Difficult as it is to imagine...the rabbit is considered endangered in Spain...If declining rabbit numbers have placed the lynx under threat, however, it is humans who will most likely cause its final extinction. Of all lynx deaths since 2000, almost 80 per cent were caused directly by humans.