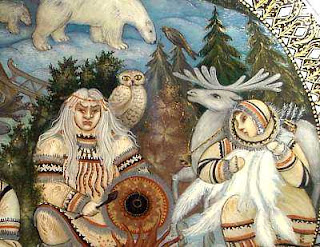 In the wake of Black Friday and in the midst of Cyber Monday, I find that Blogical offers some nourishing food for thought. Here is some of what she said:

This morning I stumbled across the article A New Generation, Poised to Reinvent, in which The New York Times interviews author Patricia Martin about her book RenGen: The Rise of the Cultural Consumer - and What It Means to Your Business

. Bizarrely placed in the shifting careers section, the article presumes to be about how a new generation of Americans can best be managed in the business world. But what they're really talking about is a dawning renaissance of American culture, ushered in by a whole generation of idealistic young people with a "growing interest in cultural pursuits, diversity, authenticity and social responsibility."

The cultural consumer isn't really a new concept, introduced as we know it in 2001 by Paul H. Phd Ray in his book The Cultural Creatives: How 50 Million People Are Changing the World

. Of the RenGen persona, Martin says it's more of a psychographic than a demographic, characterized as follows:

. . . they are eco-conscious; they take their cues from nature so they are willing to accept products that are flawed but authentic rather than slickly produced and inauthentic. Dove figured this out with the real-women campaign. They want to make a difference. They want to live many lives. They don’t want to be told, “You can’t be an architect and a poet.” They are sensualists. Because they are both idealistic and cynical at the same time, they have learned to trust what they experience rather than what experts tell them. That is why design and aesthetics are so elevated right now.

You can read the rest of her thoughtful post here.

Be careful out there....

Wow, I LOVE that picture.