Mary Beard Asks: "What Made the Romans Laugh?"

What made the Romans laugh? Was Rome a world of practical jokes, Bakhtinian carnival and hearty chuckles? Or (for the elite, at least) was it a carefully regulated culture in which the uncontrollable excess of laughter was a force to fear -- a world of wit, irony and knowing smiles? How on earth can we decide? And what would hang on the answer?

Wouldn't you love to be there for her talk? I know I would.

I suppose I should properly refer to this lady - in reverent tones, no doubt - as Professor Beard. She has, after all, a classics resume as long as my arm. But this is not a woman covered in marble dust, this is a 21st century gal. She knows funny, historical and modern, and it would be a treat to hear her speak, in Berkeley or, better yet, over the table at Chez Panisse (Alice, if you're free, pull up a seat).

Well, it's fun to dream. I will have to settle for reading her new book: Pompeii: The Life of a Roman Town. (1) 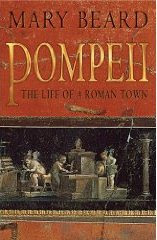 I'm enjoying her blog. One moment she is writing about the differences between Ostia and Pompeii; alerting us to monetary schemes that involve renting out ancient sites,

Quite what the new Berlusconi commissar will do to Pompeii itself, we still wait to see. There were threats of hiring the place out to corporate events for those companies that could still afford to pay during the credit crunch (perhaps this is a good side to the global economic meltdown – not even the biggest multinational will be able to afford Pompeii).

Meanwhile in Mexico, they’ve been having their own similar controversy with Placido Domingo singing at the pyramid of Chichen Itza.

I don’t quite know what I think about this. I’m old enough to have Pink Floyd playing at Pompeii (at least on the movie); I was brought up on Shakespeare plays in the ruins of Ludlow Castle; I have a soft spot for opera in the Roman Baths of Caracalla; and I like the idea (if not always the uncomfortable reality) of ancient Greek drama at the theatre of Epidaurus.

That is to say, the idea of archaeological sites being simply for the reverent contemplation of the ruins seems quite ghastly. But the point is, if you use them for spectacles and shows, and knit them back into contemporary culture, who is your target audience?

The trouble with the Domingo extravaganza was that it was way beyond the reach price-wise of the local population. There is nothing worse than the idea of these big sites being open to school kids, backpackers and other ‘ordinary tourists’ during the day… while the toffs arrive by limo at night to enjoys some expensive opera and champagne.

and in the next post she is commenting on McCain's recent remarks, telling us about the a customer service at her old bank or describing what it's like to go shopping on Rodeo Drive as a relative pauper (been there, done that, had a lot of fun). It seems that she found the right dress for the Emmy's. Splendid.

Prof Beard has been described as a "wickedly subversive commentator". I concur. The classics - and by extension, our ancestors - are more fun then (far too many dull, dry minded) teachers once led us to believe. Someone like Professor Beard can tell us all a lot about their rowdy, rude and witty ways. In making them more human, she allows us to see connections we might have missed before.

Check out A Don's Life and her new book - I think you might enjoy both.

(1) With the banking world exploding like Vesuvius, raining down fire and ashes, I find the perspective this book brings rather appealing. Like the rumblings of Vesuvius, there was plenty of warning .....now we come to the bit with the screaming and running away. T'was ever thus.

10 Things You Should Know About Pompeii

Pompeii: Protecting the Past