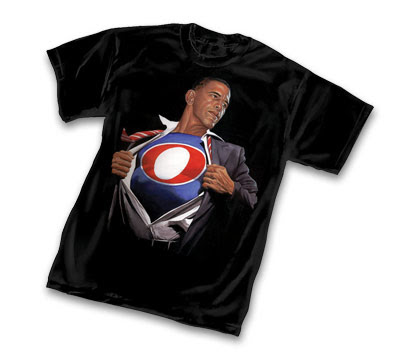 Today I would like to share an interview with Dr. Cruelty, who is finding it hard to be a super villain in today's economy. I have also discovered a short picture list of election collectibles over at the BBC. I like "Bark for Obama".

My personal favorite political item is an Obama As Superman t-shirt, designed by Alex Ross and introduced at San Diego Comic Con last summer. (1). I, for one, am not prone to Superhero worship, but I would like to go back to living in a democracy and that won't happen if We, the people, don't vote.

I would also like to take a moment to acknowledge Katie Couric who not only did a great set of interviews with Sarah Palin (2) (perhaps saving said democracy in the process?). She had another great night after the debates, including the moment when she made Hillary Clinton laugh big time by asking "Why do you think that Sarah Palin has an action figure and you have a nut cracker?". (Let's not forget that voodo kit, either. See Villification of the Other: Fear of Women in Politics) (3)


My personal action figures are the Librarian the Jane Austin figure, and the Crazy Cat Lady. As for me, I want the Librarian Tattoos.

Looking for a nice Samhain gift? Try the black cat bookends from the LA Library store.

(1) It may have inspired Senator Obama's references to being born on Krypton the other night at a recent charity event.

(2) Say what you like about Governor Palin (and I have said plenty) she did a good job on Saturday Night Live. Points to the show's writers, performers and staff for being honest, civil, funny, biting and witty, all at the same time. (That's the SNL I remember.) The Alaskan Rap was priceless.
Weekend Update

my name is sarah palin you all know me
vice president nominee of the gop
gonna need your vote in the next election
can i get a ‘what what’ from the senior section
mccain got experience, mccain got style
but don’t let him freak you out when he tries to smile
cause that smile be creepy
but when i be vp
all the leaders in the world gonna finally meet me

mccain, palin, gonna put the nail in the coffin
of the media elite
(she likes red meat)
shoot a mother-humpin moose, eight days of the week

P.S. In fairness I should point out that Hillary finally got her own action figure, as did Obama and McCain.

Thanks to M in Minnesota for the link to the Dr. Cruelty interview.