Gloria Steinem was among a group of women given the the Minerva Award yesterday at the Women's Conference in Long Beach.

As a young woman, I was not not a fan of the "sprung full grown from the head of Zeus" myth of Athena so beloved of the Greeks and Romans. It's a little too patriarchal for my taste, too too fraught with Daddy issues, too suggestive that the right source of a woman's power was through the male and that her loyalty must be to him, also. So, I went looking on the net today for a pre-Hellenic version I'd found in college. Accorring to Timelessmyths.com:

I would also recommend Thalia Took's post on Menra at the Obscure Goddess On-line Directory: 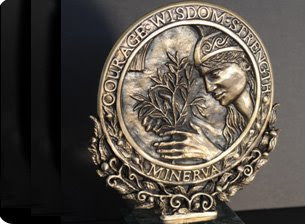 As many know, Minerva is the Goddess of Wisdom, Art, Horsecraft, Justice, War and Healing. Her images appears on the Great Seal of California. One of her creatures is the owl.

Yahoo News: Photos from the Conference

Minerva and the Altar of Liberty

Images of Women in the Ancient World - Athena

Athena, Greek goddess of wisdom, of household arts and crafts, of spinning and weaving, of textiles. Inventor of the flute, the plough and the ox-yoke, the horse bridle and the chariot. Athena, goddess of war, guardian of Athens, the city named for her; defender of heroes, champion of justice and civil law.

Concerned as we are with the role of women in today's society, we may well ask ourselves, who was Athena that she was celebrated in song and story, portrayed by artist and poet, and worshiped as the pre-eminent goddess of Greece. Was the stately grey-eyed maiden a light in the mind of man, or the dream of woman?

According to legend, Athena sprang fully-grown and fully-armed from the head of her father, Zeus, ruler of the gods on Mount Olympus. It is told that he swallowed his pregnant first wife, Metis, meaning wisdom, so that she would not bear a child stronger than he. In some versions of the story, Athena's birth was assisted by the blacksmith, Hephaestus, who opened Zeus's head with a stroke of his axe. This metaphor may suggest two possible interpretations and pose two questions. Was Zeus demonstrating his power by giving birth without a woman's help, or was he sharing his power with his daughter? Certainly, Hephaestus, a son of Zeus by his second wife, Hera, would appear to be an unlikely "midwife."