The Wife John McCain Left Behind 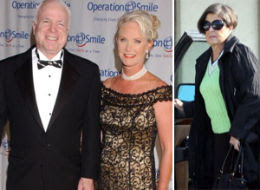 Since we're talking about character and family values, let's take a look how John McCain treated his first wife. I'd say it's pretty much the same way he has treated the economy (1):

...There is another Mrs McCain who casts a ghostly shadow over the Senator’s presidential campaign. She is seldom seen and rarely written about, despite being mother to McCain’s three eldest children...She is McCain’s first wife, Carol, who was a famous beauty and a successful swimwear model when they married in 1965.

She was the woman McCain dreamed of during his long incarceration and torture in Vietnam’s infamous ‘Hanoi Hilton’ prison and the woman who faithfully stayed at home looking after the children and waiting anxiously for news.

But when McCain returned to America in 1973 to a fanfare of publicity and a handshake from Richard Nixon, he discovered his wife had been disfigured in a terrible car crash three years earlier. Her car had skidded on icy roads into a telegraph pole on Christmas Eve, 1969. Her pelvis and one arm were shattered by the impact and she suffered massive internal injuries.

When Carol was discharged from hospital after six months of life-saving surgery, the prognosis was bleak. In order to save her legs, surgeons had been forced to cut away huge sections of shattered bone, taking with it her tall, willowy figure. She was confined to a wheelchair and was forced to use a catheter.

Through sheer hard work, Carol learned to walk again. But when John McCain came home from Vietnam, she had gained a lot of weight and bore little resemblance to her old self.

Today, she stands at just 5ft4in and still walks awkwardly, with a pronounced limp. Her body is held together by screws and metal plates and, at 70, her face is worn by wrinkles that speak of decades of silent suffering.

When McCain – his hair turned prematurely white and his body reduced to little more than a skeleton – was released in March 1973, he told reporters he was overjoyed to see Carol again.

But friends say privately he was ‘appalled’ by the change in her appearance. At first, though, he was kind, assuring her: ‘I don’t look so good myself. It’s fine. (Then).... ‘John started carousing and running around with women,’ said Robert Timber...despite his popularity as a politician, there are those who won’t forget his treatment of his first wife.

Carol insists she remains on good terms with her ex-husband, who agreed as part of their divorce settlement to pay her medical costs for life. ‘I have no bitterness,’

...She says. ‘My accident is well recorded. I had 23 operations, I am five inches shorter than I used to be and I was in hospital for six months. It was just awful, but it wasn’t the reason for my divorce.

‘My marriage ended because John McCain didn’t want to be 40, he wanted to be 25. You know that happens...it just does.’

- from the Mail On-line

Based on his actions and comments to date, I'd say he has yet to grow up.

A Biography of John McCain (humor from the Daily Show)