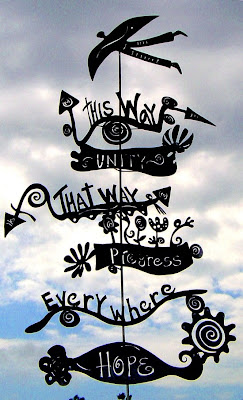 It was reported today that the Obama campaign has quietly called in the calvary to deal with swift boat-style attacks by McCain.

A fanatic is one who can’t change his mind and won’t change the subject.
- Winston Churchill
Meanwhile, Beliefnet notes that prospect of Sarah Palin as VP may be frightening to many Jewish voters in swing states. Trust me, she's it's not nearly as frightening to Jewish voters as she to the Pagan ones, or for that matter, anyone who has ever read The Handmaid's Tale.

Palin Scaring Jews: And Why It Matters

Is Sarah Palin Bad for the Jews?

Photo: An art piece title Sign Post for Change, auctioned off by MoveOn.org on Ebay to support the Obama campaign. Click here to see more of the art pieces available for sale.