Animal Rescue in the wake of Hurricane Ike 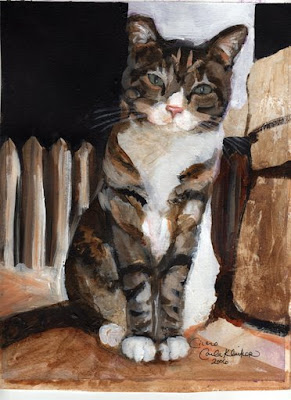 Animal rescue continues in the wake of Hurricane Ike.

The Houston SPCA offers a rescue hotline: 713-435-2990.
Other groups have also arrived to lend a hand. They include the Denver Dumb Friends League, Code 3 Associates, Humane Society of the Pike's Peak Regin, SPCA of Texax, Humane Society of Missouri, SPCA of Los Angeles, and the Louisiana SPCA. IFAW offers updates at their animal rescue blog. The American Humane Society has also sent out their highly trained emergency reponders.

If you have evacuated without your pet and would like animal rescue workers to try to retrieve it, you can call (409) 838-2510.

Conspicuous by their absence are Best Friends Society and Pasado's Safe Haven; both were very active in the aftermath of Hurricane Katrina, and deployed early to Louisiana in preparation for Hurricane Gustav.

Pasado's web site carries a short statement about why they have not responded to Hurricane Ike.

...I think it's a damn shame that ready, willing and able hands are turned away.


All of these folks are needed. Ryan Myers in an article titled "Teams Rescue Ire's Animal Victums" writes this about the pets left behind:

In Orange, one of the areas hit hardest by Hurricane Ike, one victim had no choice about leaving.

“There was a golden lab chained in a low-lying, flooded area,” said Jordan Crump with The Humane Society of the United States. “She had climbed on top of some cinder blocks in the yard to get out of the water.”

On Tuesday, four days after Ike slammed ashore, animal rescuers cut the lab’s chain and brought her to a shelter in Beaumont.

“Some people had to leave very quickly and a lot of animals were left behind,” said Dean Vickers, director of the Humane Society of Ohio.

Vickers and about 20 workers from the Humane Society’s emergency services team arrived in Southeast Texas on Sunday to begin assisting Ike’s animal victims.

“We’re getting a lot of calls from people asking us to go get their pets,” Crump said on Tuesday at the Human Society of Southeast Texas in Beaumont.

Residents who have returned home also are calling to report animals abandoned by their neighbors.

Never leave your animals behind. You can't know when you'll return.

Riding Out the Storm With A Lion

Helping Us, Help Ourselves: Disaster Preparedness For Our Families & Pets

Video: In Memory of Those Left To Die: The Animals of Katrina
This video contains images of the animals left behind; those rescued and those who were not. It is not for the faint of heart.

Painting: Cicero, by artist Carla Klinker
She does lovely pet portraits - check out her website.

A final note: As Hurricane Ike storms its way to Texas, we are asked why we wouldn't move operations there. Frankly, some states are very well prepared for animals in the wake of disaster. Florida and Texas are among them. When Ike was forecasted to travel up the Eastern Seaboard, PasadoRescue was in touch with our contacts for possible triage sites and with Departments of Emergency Management in North and South Carolina, in preparation to assist. We would like to offer large animal evacuation in Texas but are told that ranchers choose not to remove their livestock. And, of course, federal government subsidies pay to replace any livestock killed by weather (ice, snow) or disaster. Your tax dollars at work.