Helping Us, Help Ourselves: Disaster Preparedness For Families and Pets 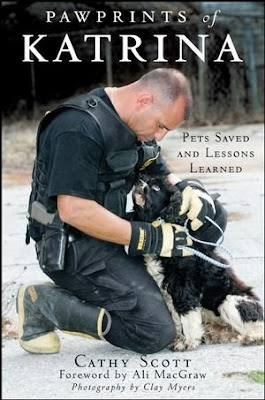 The headlines remind us that September is disaster preparedness month. Can you protect both your family and your pet(s) in an emergency? The time to plan for this is well before trouble hits. Are you really ready? The Red Cross offers an on-line education presentation. Check it out.

The Cat Adoption Team has handy tips on how to keep your animals safe, as well as the best ways to evacuate with your animals.

The Disaster News Network reminds us that:

The loss of an untold number of pets left behind to fend for themselves during Katrina spurred Congress to approve the Pets Evacuation and Transportation Standards Act. Signed by President Bush in October 2006, the new law requires emergency preparedness authorities to include in their plans accommodations for household pets and service animals. States that don't comply could be in jeopardy of losing disaster relief funds.

...the most important element in any evacuation plan was planning how to include companion animals.

"You should never - no matter what people tell you - you should never leave your animals behind," Brown insisted. "It could be days or even weeks before you can get back to them.

"I know a lot of people who left their animals behind when they evacuated for Katrina planned to come back the next day to take care of them, but that didn't happen - not because people didn't want to get their pets - because they couldn't," she said. "Pet owners have to be prepared for that scenario."

We're On Our Own:

After Ike hit, thousands of people called 911 for help, many saying things like "My home is flooded, what do I do now?" Authorit 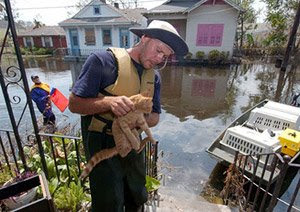 ies in Texas are asking people to use the 911 call only in cases of life-threatening emergencies. Truth is folks, that in worst case scenarios, we're on our own. Whether it be the a Killer Quake in LA or a Category Five storm in the gulf the roads will be impassable, hospitals, police and firefighters will be overwhelmed and emergency crews will be unable to reach thousands of those in need. We all need to be ready to feed and care for ourselves and our pets for up to three weeks, in any kind of weather. (1) So be prepared, make a plan, get to know your neighbors so you can help one another. Do you have enough food and water in the house? What about medical supplies, medication, blankets, pet carriers and pet food? How will you cook and heat your place if the power is out? What if you have to sleep outside as so many did after the Northridge quake? These are some things to consider.

(1) Last year, the Pacific Northwest was hit by a severe snow storm and folks living in the Seattle area were without power, in winter, for over three weeks. Wildfires in California and elsewhere left thousands homeless and many more without power during some of the hottest days of the season. Climate change models tell us that the weather will become harsher and more turbulent over time. So this week my husband and I went shopping. We are debating whether we should have a pellet stove (for heat and cooking should the power go out) vs a generator or a small, portable, propane heater. If we get a severe snowstorm up on our mountain, we could be snowed in for days, with only our nearest neighbors for help. While we are trained for pretty much any disaster in California, we are not used to living in snow country, and we still have a lot to learn.

Rescue Efforts Under Way in Texas:

More than 2 million people evacuated coastal areas of Texas and Louisiana before the storm struck, but the authorities estimated that more than 100,000 people throughout the region, including 20,000 in Galveston, had disregarded mandatory evacuation orders.

The magnitude of the power loss and the flooding raised the possibility that several major oil refineries would take more than a week to reopen.

At least 100,000 homes were inundated by surging waters, while isolated fires broke out around the region when trees and flying objects fell on electrical transformers, causing sparks. Three serious injuries were reported from a fire that broke out in a Houston restaurant.

In Houston, only the downtown area and the medical center section had power as of Saturday evening.

"It's going to be weeks before we get power to the last customers," said Mike Rodgers, a spokesman for Entergy Texas, the primary electricity provider between Houston and the Louisiana border. He said damage to the electric grid was much more widespread than the damage from Hurricane Rita, which hit the area in 2005.

Cat Rescue - found at the Petville Katrina page
Posted by Dj Connell at 7:50 AM