A Full Public Enquiry: How the Endangered Species Act May Soon Become Extinct 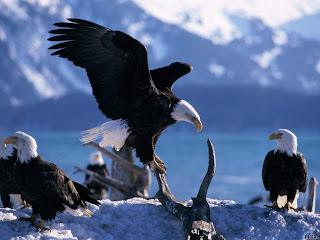 Around the net and elsewhere, Scientists and conservations are sending out warnings that the Endangered Species Act is in danger of becoming extinct. In such a corrupt administration is is not surprising to find that such a change would be a gift to Bush cronies.

An eagle soared over my house yesterday and my heart rose with him. A bald eagle, huge and regal. His wings set flat, he circled and circled ever upward on a thermal current of air. Over my house. I could barely breathe, watching him and knowing what he meant.

He was a juvenile. This was a nestling, brown all over. It will be a few years before his head and tail grow in snowy white. It was OUR juvenile. Bald eagles nested in North Branford this year for the first time in memory.

Eagles were once considered pests in Connecticut and the rest of the country. Farmers and hunters, homeowners and kids with their first guns were free to shoot them out of the sky. Eagle-welcoming wilderness made way for farms and cities. The number of bald eagles in the lower United States plummeted to historic lows by the 1930s. Worse was to come. Bald eagles are top predators so their bodies concentrated the pesticides we used freely on our yards and homes. The majestic birds declined further.

Then the government saved them. The people's outcry against losing our national symbol became great enough that eagles were classified as endangered species. We had driven them to the point of extinction. Now we were going to save them. And we did.

....The Endangered Species Act is in real danger again right now. President Bush, staunch friend of business and industry, is cutting the biologists at the Fish and Wildlife Service out of the evaluation loop. If the rule change by U.S. Interior Secretary Dirk Kempthorne goes through, it would be up to officials at agencies like the Forest Service, the Minerals Management Service and the Department of Transportation to decide for themselves if a new timber allotment, mining project or road would harm endangered animals and plants. They would not have to consult biologists from Fish and Wildlife. It fits. The Bush administration is determined to cement industry-friendly policies before leaving office in January.

No doubt there will be a full public inquiry.

Video clip: A Full Public Inquiry from a BBC show I still miss called "Yes, Minister". You can sometimes catch it in reruns on BBC America.

Photo: from the Green Scene blog
Posted by Dj Connell at 12:30 PM