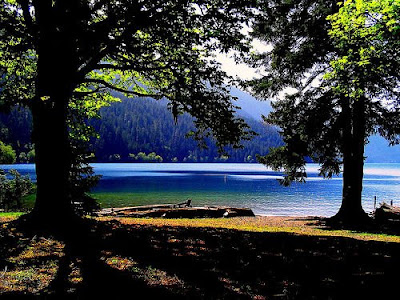 The Christian Monitor recently asked this question: Is Water Becoming The New Oil?

Public fountains are dry in Barcelona, Spain, a city so parched there’s a €9,000 ($13,000) fine if you’re caught watering your flowers. A tanker ship docked there this month carrying 5 million gallons of precious fresh water – and officials are scrambling to line up more such shipments to slake public thirst.

Barcelona is not alone. Cyprus will ferry water from Greece this summer. Australian cities are buying water from that nation’s farmers and building desalination plants. Thirsty China plans to divert Himalayan water. And 18 million southern Californians are bracing for their first water-rationing in years.

I just got back from visiting friends in California. That state is suffering from two years of drought, a situation which adds to the trouble they are having with the record setting wild fires in the area, including a fire a Mt Shasta and Big Sur, two areas much beloved by the earthwise community. The air in many parts of the state is dense with smoke, and when we flew into San Francisco airport (which is located right on the bay) I saw smokey gray haze instead of the bright blue Mediterranean light one finds in the Bay Area and I thought for a moment we were coming into Los Angeles. Firefighters have flown in to help from all over the U.S. and as far away as New Zealand and their efforts are paying off.

Fire Season Is Upon Us:

Meanwhile, the fire season in the Pacific Northwest has started with a fire at Mt Adams Wilderness Area.

100 firefighters from Arizona and New Mexico have been called in as backup. That's in addition to the 520 firefighters already on scene, including 50 from Oregon.

The fire has already burned 2400 acres of bug-infested timber on the Yakama Indian reservation. Wednesday, firefighters are working to prevent the fire from reaching the tribe's healthy, commercial timber forest.

It's a dense, roadless part of the forest considered a sacred area by the tribe, where only tribal members can roam freely.

... Firefighters say this fire could be burning all summer and halt hiking and climbing near Mount Adams.

The fires aren't the worst threat to our nation's wilderness. Courant.com reports that The Bush Administration has just opened up thousands of acres of national forest to development.

For years, the Bush administration has tried to detour around federal protections and open millions of acres of national forest to road construction and logging.

Now it has quietly negotiated a deal to convert hundreds of thousands of acres of privately owned Montana forest to residential subdivisions by paving roads in national forests.

The Forest Service has long been held under the combined thumbs of lobbiests working for developers and logging interests. A plague on both their houses.

The Environmentalists Did It!:

The biggest ecological con job in years is being waged by the U.S Republican party and their timber industry cronies. They are blaming the recent Western wildfires on environmentalists, and assuring the public that commercial logging will reduce the risk of catastrophic wildfires.

It is well known scientifically that “commercial logging actually increases fire severity by removing large, fire- resistant trees and leaving behind very small trees and flammable "slash debris"--branches, twigs and needles from felled trees. The removal of mature trees also decreases the forest canopy, creating hotter, drier conditions on the ground. The additional sun exposure encourages the growth of flammable brush and weeds. Reduction of flammable underbrush can reduce fire severity, and environmental groups have encouraged such projects. However, the Bush administration has grossly misused the funds that Congress appropriated for brush reduction near homes. In Sierra Nevada national forests last year, more than 90% of these funds were instead earmarked for preparation of large timber sales focused on the removal of mature and old-growth trees miles from the nearest town.”

Just How Non-Green Is This President? Fran Wood writes:

(This is) a president whose main environmental achievement had been designating a string of islands near Hawaii the world's largest marine conservation area. Otherwise, over nearly two terms in office, he had:

Reversed years of progress in reducing air pollution, by exempting thousands of power plants, oil refineries and factories from installing pollution controls when making equipment or other changes.

Declared carbon dioxide, the major cause of global warning, not a pollutant, thus eliminating its regulation under the Clean Air Act.

Opened millions of acres of land in Alaska and the Rocky Mountains for oil and gas drilling.

Repealed the U.S. Forest Service's Roadless Area Conservation Rule so many more wilderness areas could be eligible for logging.

Supported a plan for more nuclear power plants that included a measure to make it easier for such plants to be licensed for new reactors, regardless of whether they had been properly tested.

Revised NASA and other agency documents to remove language about climate change.

Image: Trees & Lake by Jan Tik. Check out her other images at Flicker.com
Posted by Dj Connell at 9:13 AM