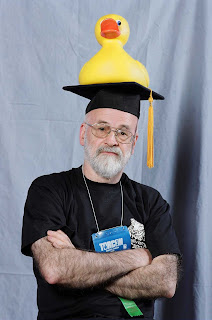 I call a call from a friend today who attended the Discworld Convention in the UK. By all accounts, Terry is doing wonderfully well on his medication. My young friend went to bed at 3 am. Terry was still up and having a great time with old friends and fans. Then he got up early the next morning and did it all again. Lest you think this is simply a matter of "Carpe diem", let me tell you that this is his usual MO at conventions. Terry Pratchett is a charming ball of energy, as anyone who has ever met him can tell you. It's good to hear that he is doing so well.

Meanwhile, plans move forward for the North American Discworld Convention in 2009. The party held by the the Discworld Con organizers on Friday at WorldCon to highlight this event was by all accounts a great success. I'm told that the Discworld decorations were very well done and that the food was great, rat-onna-stick being the one exception....Stay tuned for more news.

As most of you know, Terry's new book hits the bookstands in September. I don't know about you, but my blogging - and most of my social life - will cease until I've finished it. That's assuming I can get it out of my partner's hands. Take a tip from me, either buy two copies (and donate one later) or flip a coin. It's the only way to maintain peace in households with multiple Pratchett fans. There is nothing more irritating than listening to someone else laughing while they read the latest Pratchett novel if you haven't yet read it. (1)

One of the senior members of the Seamstresses Guild sent an old essay of his to me today. It's an article I'd never seen before, and I wanted to share it.

I had a deprived childhood, you see. I had lots of other kids to play with and my parents bought me outdoor toys and refused to ill-treat me, so it never occurred to me to seek solitary consolation with a good book.

Then Tolkien changed all that. I went mad for fantasy. Comics, boring Norse sagas, even more boring Victorian fantasy ... I'd better explain to younger listeners that in those days fantasy was not available in every toyshop and bookstall, it was really a bit like sex: you didn't know where to get the really dirty books, so all you could do was paw hopefully through Amateur Photography magazines looking for artistic nudes.

When I couldn't get it -- heroic fantasy, I mean, not sex -- I hung around the children's section in the public libraries, trying to lure books about dragons and elves to come home with me. I even bought and read all the Narnia books in one go, which was bit like a surfeit of Communion wafers. I didn't care any more.

Eventually the authorities caught up with me and kept me in a dark room with small doses of science fiction until I broke the habit and now I can walk past a book with a dragon on the cover and my hands hardly sweat at all.

But a part of my mind remained plugged into what I might call the consensus fantasy universe. It does exist, and you all know it. It has been formed by folklore and Victorian romantics and Walt Disney, and E R Eddison and Jack Vance and Ursula Le Guin and Fritz Leiber -- hasn't it? In fact those writers and a handful of others have very closely defined it. There are now, to the delight of parasitical writers like me, what I might almost call "public domain" plot items. There are dragons, and magic users, and far horizons, and quests, and items of power, and weird cities. There's the kind of scenery that we would have had on Earth if only God had had the money.

.....While I was plundering the fantasy world for the next cliche to pulls a few laughs from, I found one which was so deeply ingrained that you hardly notice it is there at all. In fact it struck me so vividly that I actually began to look at it seriously.

Let's talk about wizards and witches. There is a tendency to talk of them in one breath, as though they were simply different sexual labels for the same job. It isn't true. In the fantasy world there is no such thing as a male witch. Warlocks, I hear you cry, but it's true. Oh, I'll accept you can postulate them for a particular story, but I'm talking here about the general tendency. There certainly isn't such a thing as a female wizard.

Sorceress? Just a better class of witch. Enchantress? Just a witch with good legs. The fantasy world. in fact, is overdue for a visit from the Equal Opportunities people because, in the fantasy world, magic done by women is usually of poor quality, third-rate, negative stuff, while the wizards are usually cerebral, clever, powerful, and wise.

Strangely enough, that's also the case in this world. You don't have to believe in magic to notice that.

Wizards get to do a better class of magic, while witches give you warts.

To see where he eventually took this theory, read Equal Rites and Wyrd Sisters.

Photo: Professor Terry As The Duck Man courtesy of the good people from Noreascon Four. Click on the link to read a lovely note from Terry re that Convention.

(1) On the other hand, I've made good friends over the years by hearing someone quietly giggling to themselves in a coffee shop, restaurant or airport, seeing that they have a Pratchett book in their hand, and walking over to say "Which one?"
Posted by Dj Connell at 8:08 AM