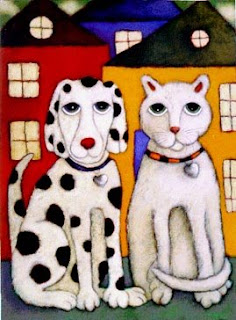 According to the National Council on Pet Population Study and Policy, about 1 million dogs and 584,000 cats are taken into U.S. animal shelters as strays each year. Sadly, only 15 percent of those dogs and 2 percent of those cats are reunited with their owners.

Even indoor cats and carefully kept dogs can get lost outside by accident. A careless friend, a young child or repair person who is in your home might leave a door open without meaning to. A storm, earthquake or accident might break a window, allowing a frightened, confused animal to run for safety. They then find themselves far from home with no way to get back.

If your pet has a microchip (and the address is current) they have a better chance of being returned to you if they wind up in a shelter or a vets office where the staff have scanners capable of locating these devices and reading the information they contain. However, if your cat or dog is found by a kind person some blocks away, they have no way of knowing it belongs to you. So, give your cat and dog a tag that has their name, your current phone number and the words "Reward" or "Indoor Only" on the bottom line. (1) This is the best way for you to get your pet back.

Pet Education.com has a very good page about I.D. tags, microchips and tattoos for pets and here is information on What To Do If Your Pet Gets Lost.

Looking for a companion animal? Avoid the Puppy Mills and check out Petfinder.com. They have a website with pictures and information on hundred of animals available in your area. You can look for an pet by type, age, size, gender and location. Check it out.

(1) Please Note: It's best for cats to wear what are known as safety or break away collars so they won't risk getting hanged or stuck when they go outside.

The BBC reports that

About 470 coins were found on 1 April at an early Iron Age burial site. They date from the 7th to 9th Century, when Viking traders travelled widely.

There has been no similar find in that part of Sweden since the 1880s.

Most of the coins were minted in Baghdad and Damascus, but some came from Persia and North Africa, said archaeologist Karin Beckman-Thoor.

and they said that The 13th Warrior was fiction.