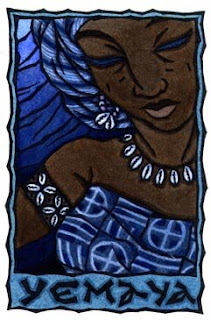 Yamaya must be smiling....

According to The Religion Blog at the Dallas News, Oprah's Book Club is promoting Paganism:

The latest selection of Oprah's Book Club is "A New Earth" by Eckhart Tolle.

Craven, a strong proponent of "orthodox Christianity," writes on his blog for Crosswalk.com, that the book is little more than a New Age recycling of ancient Buddhist teachings.

This is bad, in Craven's eyes, because, well, because Buddhism isn't Christianity....he books like Tolle's "are nothing but spiritualized self-help and repackaged paganism that serve to deceive and divert people from the One True God and the salvation that comes only through Jesus Christ."

According to The Guardian:

Winfrey's decision to include self-help book A New Earth in her book club, and embark on a global promotional campaign, has turned it into this year's publishing sensation, boosting sales of the Penguin Books title from 500,000 to four million, a far greater uplift than winning the Man Booker prize might generate.

The American book market grew by 2 per cent in 2007, and Winfrey was responsible for half that expansion, according to Penguin's chief executive John Makinson, a former journalist who took over at Penguin in June 2002. The American Association of Book Publishers says the US market was worth $24.2bn in 2006, so Winfrey provided the industry with a $250m fillip last year.

Chuck (rewrite the Constitution for a Christian nation) Norris had this to say in an article titled Oprah's New Easter:

Since Oprah's endorsement of Tolle's book a month ago, about 3.5 million copies of his spiritual self-help guide have been sent out to enlighten the minds of people around the globe. More than 500,000 people in 125 countries have signed up for the World Wide Web seminar.

But will this religious text and its subsequent Internet churchlike gathering really lead you and our world to God's gates of splendor? Is it merely a coincidence that Winfrey and Tolle's spiritual quest aligns with one of Christendom's most sacred times of year? To me, it is more evidence of the paradigm shift in our culture from its moral absolute and Judeo-Christian basis to a relativistic worldview, in which anything goes and everything is tolerated. The fact is Tolle's "A New Earth" is being adopted and transformed into Oprah's new Easter.

...Tolle himself doesn't align with any one religion but blends tenets of Buddhism, Hinduism, Islam, Sufism, Christianity and other faiths. A review in The Vancouver Sun said of Tolle:

"His spiritual outlook has become more complex since (his earlier book) The Power of Now, when he dismissed external reality as an illusion and made it sound as if 'living in the now' was a panacea for all the world's problems. …

"In addition, Tolle believes outer realities -- including politics, war, poverty and even the climate -- will magically be transformed when individuals change their inner consciousness. This may be true, but only to an extent."

...."The reason Tolle's psychology and spirituality is marketed so easily is that it is an eclectic mix of conventional and unconventional wisdom, and Western and Eastern beliefs, presented in a tolerant, non-threatening and nonsectarian way."

Horrors. Tolerance, interfaith dialogue, and unconventional wisdom. We can't be having that.

Mary Friedal-Hunt says this about the book:

I just finished reading "A New Earth" by Eckhart Tolle, a book that sees humanity more and more evolving to the place where we live with awareness, consciousness, in each moment. He explains that the past is over, the future does not exist and that life only happens in the now, the present moment. Think about that.

Yes, please. Speaking as a Pagan, I would like more people to think about that.

What would the world look like if we loved living, really loved it, and wanted other people to be as happy as we are, in the here and now? So much would have to change.

A New Earth is a profound guide for creating a better way of living and a better world to live in. At the core of the teachings lies the transformation of consciousness, a spiritual awakening that Eckhart Tolle sees as the next step in human evolution. This is a prerequisite not only to achieve personal happiness, but also to end the violent conflict endemic on our planet. Visit eckharttolle.com.

The New York Times is not quite so enamoured:

His secret, according to fans, publishing industry experts and booksellers, is packing thousands of years of teaching — from Buddha, Jesus, Shakespeare and even the Rolling Stones — into what one of his publishers, Constance Kellough, called “a clean contemporary bottle.”

“He essentially taken some of the wisdom of the ages and said, ‘Let me make this easier for you,’ ” said Vivien L. Jennings, a major independent bookseller in Fairway, Kan. “And you don’t have to read 20 books to get this wisdom. I’ll give it to you in a $14 paperback.”

What's most interesting to me is the fact that she has chosen to use the web as a huge world classroom. This has been talked about for years, but Oprah is making is happen. Leslie Poston tells us how Ms. Winfrey is reaching out to her audience:

Oprah is bringing her magic touch to the web. She has recently ventured into offering podcasts of interviews on iTunes, and teaching classes online using Silverlight and Skype....

You may not like Oprah. You may even think that she homogenizes everything from literature to news to make it all palatable to the Oprah Army. But you can't deny that she has done more to get people involved in reading, charity, self improvement and more over the decades than just about any other female public figure in recent memory. If Oprah sets her sights on something, chances are it will give whatever it is a boost into the stratosphere.

Oprah has now set her sights on using the internet to reach her viewing audience in a new and interactive way. Whether or not the subject matter is worthwhile is beside the point in this equation. What makes this interesting are the tools Oprah has chosen.

Silverlight is a new tool by Microsoft that is designed to be a competitor to Adobe Flash. Perhaps because it is saddled with the Microsoft label and a high price tag for developers, it has had trouble gaining traction against the now-standard Flash. Having Oprah in its corner could do wonders to give it the toehold it needs to be around long enough to compete against the existing giant, Flash.

The other tool chosen by Oprah is Skype. Skype has been around for a while now as a way to make cheap calls, video chat and instant message. It has had trouble catching on with multi-taskers like myself because it doesn't offer a way to use its IM feature in a program like Adium or Trillian. It's quite popular with people looking to make cheap phone calls and a reliable video chat; however, and this could push it out into the mainstream by showing it to less tech savvy people who may not have heard of it before now.

Thus far, I have only read the reviews of Tolle's book. Frankly, I am less interested in Oprah's message - which seems fairly benign and very familiar to us Pagans; yet another a user-friendly rehash of what other earthwise and metaphysical writers have been saying for centuries (1) ) - then I am in the medium she's using to conduct her classes. Does this wired trail she's blazing mean that other progressive teachers and writers can do the same sort of world-wide teaching? Perhaps. I look forward to seeing this play out.

As far as I'm concerned, if Oprah helps a few more people find a compassionate, aware path that compliments (and respects) my own, then more power to her. As things stand, Mamma Ocean needs all the help she can get.

Sia
Honor the Past, Celebrate the Present, Create the Future

(1) Including, let us note, Progressive Christians and Ecofeminists