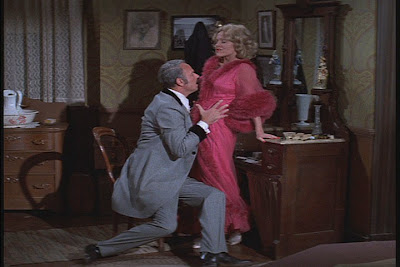 Here I stand,
the goddess of Desire,
set men on fire, I have this power,

Morning noon and night
it's drink and dancing,
some quick romancing,
and then a quick shower,

Stage door johnnies always
surround me,
they always hound me,
with one request,


Who can satisfy their lustful habits?
I'm not a rabbit!
I need some rest!
- from I'm Tired (sung by Madeline Kahn in Blazing Saddles)
Oh, goody. Another sex scandal. We'll be hearing about nothing else for at least a week.
Seriously, folks, I love a sex scandals as much as the next person (1) and I say this with no confidence that anyone will listen: There are other, more important things going on in the world. But no one is paying attention to that right now. So - if you care - here is my take on this.

The man made a stupid, arrogant, and self-destructive mistake. But it is a personal mistake. (Unlike, say, invading Iraq, it does not hurt the rest of us.) He needs to apologize to his wife and daughters. (If you want to know where my sympathies lie, it's with them, not him). He needs to make amends to his staff, and the voters, and get on with his work. I hope, I really hope, that this incident can teach a rigid, self-righteous moralist a bit about himself so that he can fight crime with more compassion and understanding than he has before. We all cheered him when he brought corporate evil doers and the Bush Administration to heel, so let's not forget that.

I, for one, do not forget that this man has done good work, and can continue to do more. I say this without regard to party or ideology: Let him work this out and learn from it. He might become a much better public servant as a result.

(Sia's note 3/14: Back when I wrote this, most of us thought this was a brief fall from grace and I argued that he should stay in office. I have since amended my argument in my later post on Sex Addiction. However, I do still maintain that he can heal and rebuild his life and that he deserves the chance to do so).

Am I surprised? Not at all. Whenever someone conforms to a rigid, perfectionist, self-righteous code of behavior, some kind of fall is inevitable. It is simply a matter of control and release. Shakespeare knew that about human beings - he made a career on this stuff. If you treat sex as a matter of shame and guilt, as so many religions do, and you give celebrities a sense of themselves as somehow more entitled then the rest of us, well, then this sort of thing is bound to happen. (2)

I am never surprised at the arrogance of powerful men (or women), and that includes men I admire, like John Kennedy and Martin Luther King, both of whom had sex - in Kennedy's case, a lot of sex - outside of their marriage. (3)

Now, if I may, I would like to move on to what is - for me, at least - the more important issue. It's this:

No one in the history of the world has even been able to successfully ban prostitution. Since the sex trade will always be with us, I want prostitution legalized, and I want it unionized, I want it regulated, and I want it taxed.
Adult, consenting Sex Workers should have:
* A union that looks out for their rights and safety (and let's get rid of the Pimps who exploit these folks, and let them choose well paid managers from among their own ranks. Such managers should be held accountable like any other sort, and should follow standard business and health & safety practices in the workplace)

* A national association that sets fair work hours, practices, standards, pricing and policy. It should also keep a list of abusive johns and workers. (In much the same way that casinos keep a "book" they all share which denies access to those who attempt to abuse these clubs).

Take this money out of the hands of gangsters and drug dealers, and give it to the workers and the community tax base.

* Medical coverage & regular health screenings (to protect their health and the health of their customers).

* Coverage for rehab and support for a drug free workplace.

* Child care off site (to be payed for by the house or collective they work for). They have children, you know. Do you want them to visit Mommy at work?

* Scholarships for those who wish to pursue other means of employment

Did you know that many nurses in the old days were prostitutes? With a shortage of health care workers in this country that is only going to grow larger, why not help sex workers who want to leave the life become nurses and health care assistants? Germany is doing just that.

Right after I wrote this, I did a google search on this subject only to find that Nurses in Britain were already way ahead of me on this issue:

The basis for the RCN policy recommendation was the nurses' view that the "stigma" of prostitution discouraged sex workers from seeking general health care, dentistry or social services, even though prostitutes often have serious health problems. Conference delegates reportedly pointed to reforms in other nations, including Germany, Holland and Australia, creating managed zones for street prostitutes and legalizing brothels. They noted that these measures had improved the health of sex workers and reduced levels of exploitation and violence.

I also want Sex Workers to have:

* Regular counseling (since, as we know, most of them come from abusive backgrounds)

* Standard government inspections of the property, the books and the employees.

* They should be taxed, and the money should be earmarked to help support women's shelters and given to agencies that help abused children and prevent child sex trafficking.

Much of what I propose has already been done in the Netherlands. We can benefit from their example. (It's not a perfect system, by any means, but let's at least consider our options from the point of view of what does work).

They start with Byron and Shelly,
and jump on your belly,
and bust your balloon!

Aye!
tired,
tired of playing the game,
ain't it a freakin shame,
I'm so...
let's face it,
everything below the waste is kapput!
I know, I know. Treating this issue in a rational or light manner takes all the fun out of it. Well...not all the fun. It just removes the shame, guilt, disease, exploitation, and violence. And isn't a sexual caste system that exploits and abuses women the real moral issue?

Madeline Kahn in Blazing Saddles - a review by StinkyLulu

The Book of Vice by Peter Sagal

(1) In fact, an old boyfriend once told me my knowledge of history involved an unusually large amount of information about Who slept with Who and Why. (No sense of humor, that guy, which tells you why he's an Ex).

(3) I would also like to point out that we women are no better than they are when it comes to issues around sex and power. Wait until we hold these positions as a matter of course, and you'll see what I mean.

Photo: Madeline Kahn and Harvey Korman in a scene from Blazing Saddles.
Posted by Dj Connell at 1:02 PM