Honoring Deer: What the Stag and the Earth Mother Teach Us 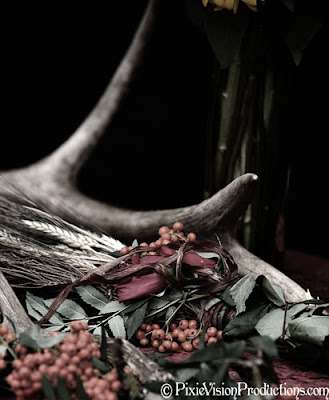 Flicker has a beautiful page of photographs honoring deer by a group called Voices in the Wilderness. I offer it today for inspiration.

Ellin Anderson writes this about the stag and the Goddess in a brilliant article titled In This Sign:

"Hail to thee, undying sun, and deer herds that springeth ever anew!" This is the language of ritual and invocation, expressing beliefs that are thousands of years older than the song of holly and ivy. With roots deep enough to weather both Christian conversion and Puritan theocracy, such fragments of Pagan poetry are clues to a time when the deer was the life -- no less sacred than the paired evergreens that stood for male and female.

To the ancient Northern Pagans, the crown-bearing antlered stag was a symbol of kingship, and of the sun's lengthening rays at the Winter Solstice. On the night of the Solstice -- known as Mothers' Night in the Scandinavian and Germanic worlds -- a shape-shifting forest goddess in the form of a white deer was said to retreat to a sacred cave, where she gave birth to the sun. Across millennia named for their use of bronze, iron and stone, shamans donned the horns and skull of a stag to invoke the antlered god, who was asked to bestow prolific deer herds and good luck on the hunt.

With the coming of Christianity, the Church fathers took a pragmatic approach to the old gods and rituals, accommodating or eradicating Pagan customs as they saw fit. For example, the age-old sanctity of deer and deer-hunting was acknowledged in the legend of St. Eustace, who pursues a stag through the forest until it turns and speaks to him, revealing a crucifix between its antlers. But for the new Christians whose ancestors had run with the deer, belief in Odin, master of the Wild Hunt; in Cernunnos, horned god of the Celtic world; in Herne the Hunter, England's woodland demigod; in the Roman goddess Diana, to whom deer were sacred; and faith in local rites and customs, with origins lost in antiquity, were stamped upon the heart -- and died hard.

As she says, it goes deep.

If you feel drawn to the image of stag or deer this season, it could be a call to look at how you guide and lead in this life and it could also be a lesson in compassion, and gentle strength. (1)

The Stag has always been a very potent and meaningful totem for me, especially at Yule, and I keep a statue of a stag on my altar to keep me in mind of certain duties and gifts I've been given. For more on this subject, I would recommend reading The Winter Solstice: The Sacred Traditions of Christmas

which has a wonderful section on the beasts of winter. It offers a historical overview and demonstrates that animals with antlers have long been seen as sacred.

For Earthwise parents of young children, I would also recommend a book titled First Snow in the Woods: A Photographic Fantasy

; a lovely story with beautiful photographs, in which a baby deer learns to follow his heart song.

Many among us will meditate and do what we can to find meaning in whatever way is best for us this season. My thoughts today are with those who wish to celebrate Mother Night with honor and grace in a culture that supports neither. May you find a center of peace and calm amid all the din and chaos. Remember that wisdom often come to us in quiet and unexpected ways. Like a deer standing near us in the forest, we may not notice our teachers, even when they are right next to us. The important (and sometime difficult) thing is to make a safe place in our hearts that welcomes them in, shelters them from harm, and allows them to speak.

May you have both joy and meaning on your life's path. May you have work that is worthy of your spirit and find the time to celebrate your own unique gifts. May you also have true friends around you in the year to come.

Wishing you the many joys of the season,

(1) In 2002 I wrote an article titled Mother Wit for Yule, where I talked about the responsibility we have towards ourselves and others this time of year. Here is an excerpt:

Yule and Solstice are holidays in tune with our own rhythms. The energy of Gaia becomes dormant, yet remains vital. So too, does my spirit. In my tradition, this is a time for reflection. The animals follow their instincts and take to their dens and shelters. We humans also need a bit of rest and quiet. For me, that is the peaceful meaning of Yule. Add to that the beauty and hope of Solstice; a time of dark, cold reality made easier by the hope we hold of a warmer, more prosperous future. Keeping watch at Solstice links us to our friends in the present day and to our Pagan ancestors long since past.

I began to take back the things of the past many seasons ago. That tree for one thing, that World Tree, that's mine. And those bright, hopeful candles are mine again, as well. This is a festival of light, after all. That circle called a wreath is mine, so too, the holly bush. Before I became Pagan, I was always drawn to pictures of a stag standing alone in snow. I'd see this design in different forms over the years and it always spoke to me. Now I know why. And look at that old Shaman dressed in furs. He's mine now, too. He was lost for a time, selling sodas if you can believe it, but he's back again where he belongs. He still brings gifts, but the gifts he offers are very different than the ones I'd known before.

Yule is also a time for good company and feasting. For our ancestors this was the time when the Harvest was in and the clan gathered to celebrate. Whatever they had gathered or grown that year is all they had to live on until spring. There's hope in that and terror, too. They knew to watch warily for the winter storms and to fear the floods and freezing temperatures that followed. No merchant ships could bring in supplies in such weather and the game they had hunted so easily in summer was now scarce. This is the time when Death stalked the weak, the sick, the very young and the very old. For that reason this was a time to gather together with friends around the fire. You and I take pleasure in celebrating with our friends and family. For us, such gatherings make for a pleasant diversion. For them it was a matter of survival. "Send out the call to feast", they said, "and gather the Clan. For we need to know who to count on in the dark days ahead and who will need our support."

Gifts were exchanged during this season for a variety of reasons. The most important one of all was to strengthen the bonds of family and tribe. Only the very rich could afford to be frivolous in this regard. The rest of us needed and exchanged useful items like needles and cloth, knives and arrows, food, pots or clothing. These things didn't sit on a shelf, unused, unwanted and gathering dust. They were thoughtfully given and gratefully received because they were needed. Gifts in those days were serious business.

Shamans used this time to meditate and to gather strength and spirit for the long, dark months ahead. I find that I also need to be alone. Sometimes I feel sad, and no wonder; it's a dark time of the year in more ways than one. Yule invites us to listen to that still, small voice inside ourselves. Go back into the cave for a while and come out again in spring. Change comes in this way. So does renewal.

The Stag and the Earth Mother
Posted by Dj Connell at 11:37 AM