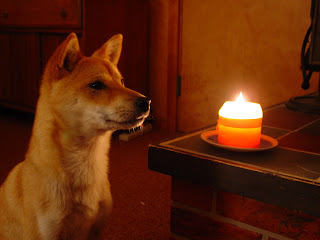 Friends have written in, asking why I was so worried about Chaos, in particular. It's because she lives on a 7 acre ranch with just her (fabulous) Sheba Inu. Her place is in a dry canyon, out in a rural area, and there is only one way out.

She is fine for now.

Because of the unusually strong winds, large embers have flown very far and caused new fires up to two miles away, and so everyone is keeping careful watch....

Update re Chaos (in her own words)

The police woke me up at 5:00 -- there's another fire, this one on ---- Road behind the apartment complex in town. That means it's on our side of the road with just a few structures and the ridges separating it from the house. It's burning more down towards Eternal Valley, but when dawn breaks and the winds pick up, it's anyone's guess where it will go.

There are four police cars in the yard, so there are plenty of eyes watching for embers on the ridge and lower down.

I've been packing up the papers and some other stuff and am about ready to throw and go if need be. If that happens, I'll be incommunicado for a while so I wanted to give you the bump. I'll update every hour or so as I can --

I went from 4 police cars to 2 to 4 and now I have 3. Morning news coverage is finally starting (hey, I've been looking since 5!) and it seems that the San Fernando Rd fire is being knocked down. The winds have kicked up, but are not as strong today (yea!) so they might be able to put it out before it hits the ridge. Once this one is out, I'm safe unless another fire starts or the wind goes insane. All prognostications are for less wind today, with the Santa Ana dying late this afternoon. We'll see.

The ranch up Canyon has been evacuated of horses as a precaution. As for the other fires in Santa Clarita, the one in Soledad Canyon that started last night is out. Buckweed is happily burning away, but is not burning in my direction. Ranch and Magic fires are still thinking are joining up, and have a string of smaller fire between them from embers being blown around. Both are also burning away from me, towards the coast.

The police have all left, there's no smoke, and (most importantly), no helicopters. I think it's out.

Too bad I can't say that about the other 20+(!) named fires burning between Santa Barbara and the border.

I did have to evacuate for a few hours this afternoon, but my dog and I returned home about 4:30. The fire did not crest the ridge and my property is untouched by fire. The Santa Ana winds on the other hand, brought down two trees (one very large) and a lot of branches. One of the very large branches narrowly missed the house.

In light of the fact that the fire near me was set (by a fire bug) not once, but twice today, my truck is still packed to go.

The winds have laid down and the Santa Clarita Valley fires are rapidly being brought under
control.

My one bright spot: the high winds stripped some surrounding foliage and I seem to have a hawk's nest about 20 feet from my back porch.

PS Keeping the boxes by the door ... just because.

Other friends are in shelters, currently safe and/or out in the field, helping with the rescue efforts.

I'll have an update on the animal rescue efforts by tomorrow.