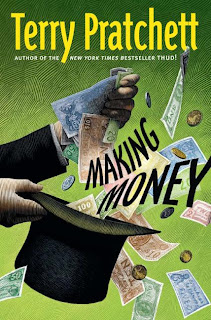 Having finished, as he puts it, "the Hollywood stuff"(1) and completed most of his U.S. book tour Terry Pratchett has gone on to the National Book Festival in Washington, D.C. As I write this he is having breakfast at the White House with other authors and the First Lady. The President will no doubt make his usual appearance....and what I wouldn't give to be a fly on that wall.

His new book, Making Money, is finally out. It is another chapter in the Discworld series. As the Guardian Unlimited Notes:

If you've never read Discworld , then perhaps you're unaware that what started out as a very funny fantasy spoof quickly became the finest satirical series running. It has dealt with - among many other topics - racism, sexism, journalism, death, war, the army, the Inquisition, the ambiguous nature of good and evil, and the uncomfortable power of narrative, all in novels that are smart, hilarious and humane. Come to think of it, if you've never read a Discworld novel, what's the matter with you?

A spoiler free review by the Badger Herald (wonderful name!) is here.

After 38-odd series novels, teen-targeted spinoffs, picture books and scientific essays, you could forgive the venerable Terry Pratchett, probably the only 45-million-copy-selling author to be compared on his jacket covers to Chaucer, for letting a book or two print itself......All successive thoughts (which are the important ones, as one learns unabashedly devouring the aforementioned teen spinoffs), however, were the same: “Gold. Pure, unadulterated, pineapple-cream-pie-coated gold."

It would be nice, he reflected as he ran up the steps, if his lordship would entertain the idea that an appointment was something made by more than one person. But he was a tyrant, after all. They had to have some fun.

Drumknott, the Patrician's secretary, was waiting by the door of the Oblong Office, and quickly ushered him into the seat in front of his lordship's desk.

After nine seconds of industrious writing, Lord Vetinari looked up from his paperwork.

"I trust the day goes well with you? Up until now, that is?"

Moist looked around, sorting hastily through the Post Office's recent little problems. Apart from Drumknott, who was standing by his master with an attitude of deferential alertness, they were alone.

Lord Vetinari lifted an eyebrow with the care of one who, having found a piece of caterpillar in his salad, raises the rest of the lettuce.

"We got a bit carried away," said Moist. "We were a bit too creative in our thinking. We encouraged mongooses to breed in the posting boxes to keep down the snakes . . ."

"Er . . . which, admittedly, we introduced into the letter boxes to reduce the numbers of toads . . ."

"Er . . . These, I must in fairness point out, got into the boxes of their own accord, in order to eat the glue on the stamps," said Moist, aware that he was beginning to burble.

"Well, at least you were saved the trouble of having to introduce them yourselves," said Lord Vetinari cheerfully. "As you indicate, this may well have been a case where chilly logic should have been replaced by the common sense of, perhaps, the average chicken. But that is not the reason I asked you to come here today."

"If it's about the cabbage-flavored stamp glue—" Moist began.

Vetinari waved a hand. "An amusing incident," he said, "and I believe nobody actually died."

"The one they call ‘The Lovers'?" said Vetinari. "The League of Decency did complain to me, yes, but—"

"Our artist didn't realize what he was sketching! He doesn't know much about agriculture! He thought the young couple were sowing seeds!"

"Ahem," said Vetinari. "But I understand that the offending affair can only be seen in any detail with quite a large magnifying glass, and so the offense, if such it be, is largely self-inflicted." He gave one of his slightly frightening little smiles. "I understand the few copies in circulation among the stamp collectors are affixed to a plain brown envelope." He looked at Moist's blank face, and sighed.

"Tell me, Mr. Lipwig, would you like to make some real money?"

Moist gave this some thought and then said, very carefully: "What will happen to me if I say yes?"

"You will start a new career of challenge and adventure, Mr. Lipwig."

Moist shifted uneasily. He didn't need to look around to know that, by now, someone would be standing by the door. Someone heavily but not grotesquely built, in a cheap black suit, and with absolutely no sense of humor.

"And, just for the sake of argument, what will happen if I say no?"

"You may walk out of that door over there, and the matter will not be raised again."

It was a door in a different wall. He had not come in by it.

"That door over there?" Moist stood up and pointed.

Moist turned to Drumknott. "May I borrow your pencil, Mr. Drumknott? Thank you."

He walked over to the door and opened it. Then he cupped one hand to his ear, theatrically, and dropped the pencil.

Clik! The pencil bounced and rolled on some quite solid-looking floorboards. Moist picked it up and stared at it, and then walked slowly back to his chair.

"Didn't there used to be a deep pit full of spikes, down there?" he said.

"I can't imagine why you would think that," said Lord Vetinari.

"I'm sure there was," Moist insisted.

"Can you recall, Drumknott, why our Mr. Lipwig should think that there used to be a deep pit full of spikes behind that door?" said Vetinari.

"I can't imagine why he would think that, my lord," Drumknott murmured.

"I'm very happy at the Post Office, you know," said Moist, and realized that he sounded defensive.

"I'm sure you are. You make a superb postmaster general," said Vetinari. He turned to Drumknott. "Now I've finished this I'd better deal with the overnights from Genua," he said, and carefully folded the letter into an envelope.

The tyrant of Ankh-Morpork bent to his work. Moist watched blankly as Vetinari took a small but heavy-looking box from a desk drawer, removed a stick of black sealing wax from it, and melted a small puddle of the wax onto the envelope with an air of absorption that Moist found infuriating.

Vetinari looked up and appeared surprised to see him still there.

"Why, yes, Mr. Lipwig. You may go." He laid aside the stick of wax and took a black signet ring out of the box.

"I mean, there's not some kind of problem, is there?"

"No, not at all. You have become an exemplary citizen, Mr. Lipwig," said Vetinari, carefully stamping a V into the cooling wax. "You rise each morning at eight, you are at your desk at thirty minutes past. You have turned the Post Office from a calamity into a smoothly running machine. You pay your taxes and a little bird tells me that you are tipped to be next year's chairman of the Merchants' Guild. Well done, Mr. Lipwig!"

Moist stood up to leave, but hesitated.

"What's wrong with being chairman of the Merchants' Guild, then?" he said.

With slow and ostentatious patience, Lord Vetinari slipped the ring back into its box and the box back into the drawer. "I beg your pardon, Mr. Lipwig?"

"It's just that you said it as though there was something wrong with it," said Moist.

"I don't believe I did," said Vetinari, looking up at his secretary. "Did I use a derogatory inflection, Drumknott?"

"No, my lord. You have often remarked that the traders and shopkeepers of the guild are the backbone of the city," said Drumknott, handing him a thick file.

"I shall get a very nearly gold chain," said Moist.

"He will get a very nearly gold chain, Drumknott," observed Vetinari, paying attention to a new letter.

"And what's so bad about that?" Moist demanded.

Vetinari looked up again with an expression of genuinely contrived puzzlement.

"Are you quite well, Mr. Lipwig? You appear to have something wrong with your hearing. Now run along, do. The Central Post Office opens in ten minutes and I'm sure you would wish, as ever, to set a good example to your staff."

When Moist had departed, the secretary quietly laid a folder in front of Vetinari.

"Thank you, Drumknott, but why?" he said.

"The death warrant on Albert Spangler is still extant, my lord," Drumknott murmured.

"Ah. I understand," said Lord Vetinari. "You think that I will point out to Mr. Lipwig that under his nomme de felonie of Albert Spangler he could still be hanged? You think that I might suggest to him that all I would need to do is inform the newspapers of my shock at finding that our honorable Mr. Lipwig is none other than the master thief, forger, and confidence trickster who over the years has stolen many hundreds of thousands of dollars, breaking banks and forcing honest businesses into penury? You think I will threaten to send in some of my most trusted clerks to audit the Post Office's accounts and, I am certain, uncover evidence of the most flagrant embezzlement? Do you think that they will find, for example, that the entirety of the Post Office pension fund has gone missing? You think I will express to the world my horror at how the wretch Lipwig escaped the hangman's noose with the aid of persons unknown? Do you think, in short, that I will explain to him how easily I can bring a man so low that his former friends will have to kneel down to spit on him? Is that what you assumed, Drumknott?"

The secretary stared up at the ceiling. His lips moved for twenty seconds or so, while Lord Vetinari got on with the paperwork.

Then he looked down and said: "Yes, my lord. That about covers it, I believe."

"Ah, but there is more than one way of racking a man, Drumknott."

"Thank you, Drumknott. I value your cultivated lack of imagination, as you know."

"In fact, Drumknott, you get him to build his own rack, and let him turn the screw all by himself."

Lord Vetinari laid his pen aside. "You have to consider the psychology of the individual, Drumknott. Everyone may be considered as a sort of lock, to which there is a key. I have great hopes for Mr. Lipwig in the coming skirmish. Even now, he still has the instincts of a criminal."

"Oh, there are all sorts of little clues, Drumknott. But I think a most persuasive one is that he has just walked off with your pencil."

A Conversation with Terry Pratchett

Euan Goes To The Disworld Convention
Posted by Dj Connell at 6:51 AM