Alex the Parrot Passes On But Leaves Us Wiser 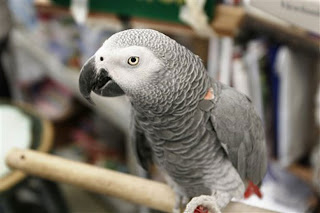 Alex
1976 - 2007
Live Science reports that "Alex the African grey parrot is dead, and all across the country anthropologists and psychologists are dressing in black.

The article goes on to say that "Alex was best known to the public as the amazing talking parrot. Way beyond "Polly want a cracker," this bird knew more than 100 words and could hold a decent conversation.

Scientists in particular mourn his passing, not just because Alex was an excellent linguist, but also because he rattled our cage....for a long time, the chimp language people thought their animals were pretty special. But then came Alex."

The Daily Galaxy notes that "Pepperberg wrote that Alex's intelligence was on par with that of dolphins and great apes. She also reported that Alex had the intelligence of a five-year-old human and had not reached his full potential by the time he died...."The work revolutionized the way we think of bird brains," said Diana Reiss, a psychologist at Hunter College who works with dolphins and elephants. "That used to be a pejorative, but now we look at those brains — at least Alex's — with some awe."

As an animal activist I believe that Alex has taught us another important lesson: That it is morally wrong and outrageously cruel to take such intelligent, long lived birds and lock them in cages without appropriate companionship or stimulus. Too often we treat them like decorations and pretty toys and they can go quite literally insane with such treatment. Below you will find a link to parrot rescue groups. If you wish to "own" a parrot, please consider adopting one in need. For more on this issue, read the article titled Bird Brains and Animal Rights

Alex's death on September 14th was so important, it was reported in the The New York Times . The online report offers a YouTube video of Alex at work and notes that "Alex was the subject of 30 years of experiments challenging the most basic assumptions about animal intelligence."

A link for other YouTube videos can be found below.

The press release from the Alex Foundation says this:

Over the course of 30 years of research, Dr. Pepperberg and Alex revolutionized the notions of how birds think and communicate. What Alex taught Dr. Pepperberg about cognition and communication has been applied to therapies to help children with learning disabilities. Alex’s learning process is based on the rival-model technique in which two humans demonstrate to the bird what is to be learned. Alex and Dr. Pepperberg have been affiliated with Purdue University, Northwestern University, the University of Arizona, the MIT Media Lab, the Radcliffe Institute, and most recently, Harvard University and Brandeis University.

Alex has been featured worldwide on numerous science programs including the BBC, NHK, Discovery and PBS. He is well known for his interactions with Alan Alda in an episode of Scientific American Frontiers on PBS and from an episode of the famed PBS Nature series called “Look Who’s Talking.” Reports on Alex’s accomplishments have appeared in the popular press and international news from USA Today to the Wall Street Journal and the New York Times. The Science Times section of the New York Times featured Alex in a front-page story in 1999. That same year, Dr. Pepperberg published The Alex Studies, a comprehensive review of her decades of learning about learning from Alex. Many other television appearances and newspaper articles followed....

Alex has left a significant legacy—not only have he and Dr. Pepperberg and their landmark experiments in modern comparative psychology changed our views of the capabilities of avian minds, but they have forever changed our perception of the term “bird brains.”

Thank you, Alex, and thank you Dr. Pepperberg.

Drawing the Line: Science and the Case for Animal Rights
From Publisher's Weekly: Whether or not one accepts Wise's premise that certain animal species meet the law's criteria for personhood, his book is a fascinating examination of animal behavior and intelligence. Crammed with data, case studies and reports from the field, it engages the reader in a thoughtful debate about the place of animals in a world dominated by humans. Not only does Wise (Rattling the Cage) know how to build a logical argument for legal rights for some animals, he also knows how to tell a good story. From early morning forays in Ugandan mountain forests, where he observes the complex behavior and social structure of chimpanzees, to the MIT Media Lab, where he chronicles the astounding mental agility of its resident parrot-scholar, Alex, Wise strengthens his case and intrigues the reader with his tales.

Hundreds of clever, loving parrots and other birds are abandoned and in need of good homes. Here is a link to parrot rescue information and groups in your area.