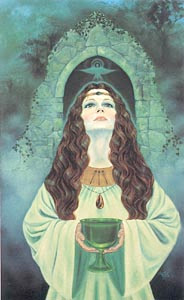 NO Spoilers (but some general speculation as to
myth and meaning) Below!
Sia's Post:

BBC corespondent Neil Hollows speculates about the title of the last Harry Potter book, Harry Potter and the Deathly Hallows, and what it might mean:

Perceval, one of King Arthur's knights, visits the castle of the wounded and mysterious Fisher King. There he is shown a "Grail" decorated with jewels.....Perceval was shown other objects too - a sword, a platter, and a lance with a drop of blood falling from the tip. They often appear together in the medieval stories, and were described a century ago as the "Hallows" by Arthur Waite, a writer with an interest in the occult.

Waite's writing makes The Da Vinci Code seem modest and cautious. "Each of the Hallows has its implied enigma... they are both declared and undeclared", he wrote in a curious book of 1909 where he describes the "Hallow-in-chief" - the Grail itself, and the "lesser Hallows".

This was at the time when it first became popular to look for hidden meanings in the Grail stories. In 1888, the folklore expert Alfred Nutt wrote a highly influential book where he argued the Grail stories were a way of telling an older, pagan, Celtic myth. He linked them to a people called the Tuatha Dé Danann, who are said to have brought four magical treasures to Ireland; a cauldron, spear, stone and sword.......
(Sia's Note: I've added the additional links to the story above which you won't find on the BBC site.)

Today we are going to hear a lot of noise from certain sources about Harry being evil. I don't let it bother me and I hope you won't either. Let's focus on what's important. Today I will delight in this unprecedented excitement about a book. I keep in my heart all the lucky kids who grew up with these books. I hope for their sake that the last book will be the best.

Today I will remember those poor kids who are denied any sort of fantasy and magic in their reading. Some of those children went to that hate-filled camp (you know the one I mean) and they are taught to fear Harry Potter (and pretty much life itself). They will grow up and become adults. Perhaps by then, their souls will have expanded and their minds will be free. I like to think that they will see a Harry Potter book, and they will wonder what all the fuss was about. Some will pick up the first book and they will read about friendship, courage, imagination and loyalty, and then they will finally understand. Until then, I wish them well.

Don't be silly. There are no other books. Not today.