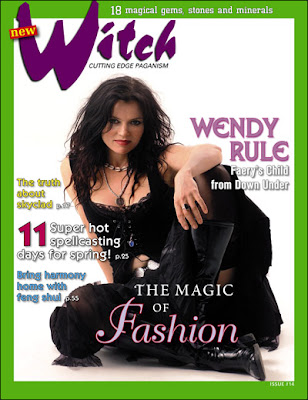 I've just been informed by the publisher that New Witch Magazine will feature an interview with a Pagan member of the military recently returned from serving in Iraq. This interview will appear in their July 07 issue.

You can find a review of this magazine by Mammawitch here. She writes book reviews for Pagan parents at the Music for the Goddess website.

You can also check out the New Witch blog.

Full Disclosure: These magazines are published by Anne Niven & Co. over at BBI Media. Anne is an old pal 'o mine, and my work has appeared in PanGaia.

Help Support Full Circle: Any money made from book sales via the Powell's Books or Amazon links at this blog goes to support non-profit efforts such as the Pagan Voting Project, the Spiral Steps Support Groups, The Gaia's Guardian's Project (which supports those who do companion animal & wildlife rescue and work to protect the environment), and the Earthwise Networking Project (which helps like-minded folks connect to do some good where they live). Thank you so much.