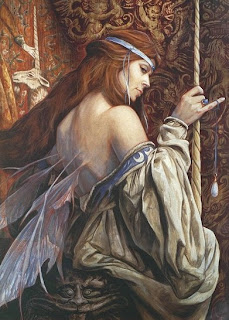 I sent out Beltane greetings to friends today.

Our own celebrations will begin at sunset on April 30th, and continue on through the time of Old Beltane (1) and a bit beyond. These celebrations include parties, dancing the sun up, rituals, feasts, decorating springs and wells, Morris Dancers, rituals and May Poles. That's Beltane Old Style. Our celebrations also include habitat restoration work, native gardening efforts, raising funds for local charities, food drives, supporting animal rescue groups, and other meaningful work for Mama Gaia and her creatures. That's Beltane New Style.

It is a busy and beautiful time.

Old Style or New Style it's a time for flirting, fun and frolic. Being uppity women, Snakemoon and I both own quote buttons that say Hi, I'm Pagan. Ask Me About My Sex Holiday.

Beltane is also a time to celebrate the Green Man. If you have not already seen it, you may like this old essay of mine titled In Praise Of Pagan Men

This is a time to cherish the earth while we celebrate spring. For example, our Gaia's Guardian's project helps recruit volunteers from among our earthwise friends to work with mainstream, locally based non-profit groups that help both animals and the planet. It's always been important to me to build these kind of links between Pagan volunteers, and their neighborhood community service organizations. It's something I think needs doing. I find it rewarding, as well. (2)

The timing of this Cross Quarter Holiday can be confusing. Here's why:

* Astrological Beltane: Occurs when the sun is at 15 degrees Taurus. (Usually around May 5th).

* Astronomical Beltane: The time when the constellation Pleiades can be seen on the dawn horizon. Our ancestors would have been well aware of changes to the stars that heralded a change in seasons; something most moderns now miss.

* Calendar Beltane - (AKA May Day): This is commonly celebrated on May 1st. However, it is important to note that calender changes made by the Pope Gregory XIII in 1582 moved the date backwards by 11 days in most European countries. Overnight, May 12th became May 1st. (Note: England and American did not adopt the Gregorian calendar until 1752). Thus, the Calendar puts the well known May Day celebrations such as Morris Dancing, May Poles and Fire Festivals, et al, at at a time far earlier than they were previously held. In Medieval and Renaissance times these celebrations took place 11 - 15 days later in the season; at a time when the weather was noticeably warmer and dryer, travel (both by sea and over land) was easier and safer, many more spring flowers bloomed, a larger number of young animals were about and thriving, and it was far more pleasant to be outside.

* Lunar Beltane: Occurs during the first full moon in May.

Many ancient and modern calendars are based on either lunar or lunisolar calendars. Such calenders were/are used by people in Native American, Hebrew, Islamic, Asian, Hindu and Pagan cultures. Many ancients peoples, including the ancient Celts, Egyptians, Africans, Mayans, Hawaiians, and Babylonians, used lunar calendars.

* Solar Beltane - (AKA Cross Quarter Beltane): Beltane is a Cross Quarter Holiday, one that stands halfway between a solstice and an equinox in the Wheel of the Year. It's exact date and time is calculated in relation to the other seasonal holidays ocuring in a 365 day-long solar year. You can check this on sites such as the Archaeoastronomy site.

* Tribal - (AKA Festive Beltane): Our ancestors often held feasts, faires, and festivals that lasted for many days. (This makes sense when you consider that travel to and from these gatherings could take days. Why travel all that way for a brief event?) Today, Pagans and others celebrate this holiday over a period of several days, often gathering to meet or do rituals at a time most convenient for their families and/or group.

The Wheel of the Year:

The Wheel of the Year is celebrated by Pagans, Druids, Wiccans and others as a way to honor the past, and be in touch with nature. Please Note: The number of holidays on the Wheel remains constant, but their names and focus may vary according to one's culture and tradition.

More information and links can be found in the footnote #1.

Happy Spring to all here.


(1) Doug and Sandy Knopf write that our ancestors knew the time of Beltane was near when they saw the rising of the constellation Pleiades on the dawn horizon. The Pleiades are also known as the Seven Sisters and the first born and most beautiful of the Sisters is named Maia. The month of May is named for Maia.

Due to various calendrical changes down through the centuries, the traditional date of Beltane is not the same as its astrological date. This date, like all astronomically determined dates, may vary by a day or two depending on the year. However, it may be calculated easily enough by determining the date on which the sun is at 15 degrees Taurus (usually around May 5th). British Witches often refer to this date as Old Beltane, and folklorists call it Beltane O.S. ('Old Style'). Some Covens prefer to celebrate on the old date and, at the very least, it gives one options.... This may also be a consideration for Covens that need to organize activities around the week-end.

Lunar Beltane occurs on the first full moon in May. Mark McNutt notes that

Pagans speak of Lunar Beltane, which is the time of the Full Moon in the middle of Spring, always a Moon in Scorpio which implies the mood of sexual fertility and balanced with the sensuality of Taurus. This is why it is such a Bel -time. The ritual of Beltane celebrates life coming into full fertility in the garden and in our own beings. Life, death, and sexuality are transformative partners in the walk of life.

Druid Richard Eaton believes that Beltane is not so much a sexual time in the Wheel of the Year but a sacred fertility festival celebrating birth.

(2) While living in Northern California, my husband and I developed an online Earthwise Community calendar for that state that was, I believe, unique, in part because it supported the view that Pagans are people who walk between worlds. We list social and cultural events on our calendar as well as arts and crafts postings, gardening, musical and family-friendly events, as well as nature hikes and camp outs. These are listed right alongside rituals, Pagan classes and drumming circles. After all, we Pagans have lives. I enjoyed doing that (as time consuming as it was) but it is something I had to give up when we moved to a new state. I notice with a great deal of quiet pride that other people in the earthwise community are doing this sort of broad-focused networking in their communities and using the new media to great effect. Good on you, folks.

Wheel Of The Year: Living the Magical Life by Paulene Campenelli

The Witches' Sabbats by Mike Nichols.

Green Man: Tales of the Mythic Forest: Terri Windling (Editor) A book of stories about the Green Man and the Green Woman.

The Green Man: Spirit of Nature by John Mathews.

Green Magic: The Sacred Connections to Nature by Ann Moura

Lord of Light and Shadow: The Many Faces of the God by Dj Conway

Save Our Planet: 750 Everyday Ways You Can Help Clean Up the Earth/25th Anniversary Edition by Diane Maceachern

Circle Round and Sing by Anne Hill

Artwork: This image is by the brillent Mr. Brian Froud. Brian was kind enough to let us use several of his images for our Fairy-themed Witches Ball in 2001. He also donated several prints for our silent auction. This ball was a charity fundraiser for our local Humane Society and over 600 people attended that year. Brian lives in the UK, and he was scheduled to tour the U.S. and to attend our event as Guest of Honor but 9/11 forced he and his wife to cancel their plans.
Posted by Dj Connell at 12:19 PM