Today is the first day of Spring and a time many Pagans celebrate Ostara. You can feel a change in the air, and in the acts and attitudes around us. Nature knows it. In the Pacific Northwest where I live the migratory birds are returning, the tree frogs are singing for mates, the plum trees are in bloom, and the light changes daily. Gardeners like me are flocking to their local nurseries like birds to a feeder. I spent a lovely day last weekend at a native plant nursery, breathing in the scents and planning wild gardens to come. Oh, for a duck pond now that Spring is here!

Meanwhile, Wren's Nest reports that an ancient perfume factory dedicated to the Goddess of Love has been discovered in Cyprus. According to the archaeologist on site: 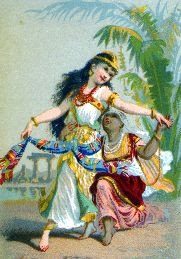 "We were astonished at how big the place was … Perfumes must have been produced on an industrial scale. No wonder the island got its reputation for possessing the skills of Aphrodite,” said National Research Council archaeologist Maria Rosa Belgiorno.

(For you history buffs, the Corning website has some wonderful information on the history of glass and glass making.)

The article goes one to note that: Perfumes are displayed in alabaster vials ...and are made of olive oil, pine, coriander, laurel, bergamot, parsley and bitter almonds...The scents are named after the Greek goddesses Aphrodite, Hera, Athena and Artemis.

Anytime I visit a museum, I look for ancient glass. Some of the most evocative designs are found in perfume jars; those enduring, sensual icons with their female curves and phallic shapes which so clearly exhibit the powerful, unconscious, biological link between sex and scent.

The ancient Egyptians understood this connection. They lived in a sex positive culture in which perfume was a sensuous (and lucrative!) art form, one closely involved with their earliest Goddess, Hathor. As Judith Illes notes in her essay on Hathor, Lady of Beauty:

Hathor was the matron and embodiment of what were considered the pleasures of life 5,000 years ago- and which for many, remain so even today: joy, love, romance, fecundity, dance, music, alcohol and perfume. A deity of women, she ruled anything having to do with the female gender. Yet although she was intrinsically connected to the female of the species, Hathor cannot be considered only a women's deity. She also had a large and devoted following among men. As Lady of Malachite, Lady of Turquoise, Hathor was also connected to metal. Holding spiritual dominion over the Sinai Peninsula, she was responsible for the success and well being of the mines in that area. Apparently Hathor was as intensely worshipped by male miners and soldiers, as she was by women in childbirth or young girls desirous of husbands. Both genders were able to recognize the sacred divine within her seductively vibrant joyous beauty.

While we are on the subject of love, scent and the history of sex, let us not forget one of the great modern avatars on that subject: Pepe le Pew, the amorous French skunk who lived for love (and who inspired Johnny Depp's portrayal of Captain Jack Sparrow in Pirates). As Pepe would say "Love is in the air, No?".
Indeed it is. National Public Radio reports that: An exhibit in Rome aims to explain the role of Eros, the most powerful and most elusive of the ancient gods. The show at the Colosseum seeks to illustrate the huge gap between contemporary attitudes to erotic love and how the subject was treated in antiquity.
Speaking of exhibits, Kate Smith recently wrote an article titled Ancient Egypt to Japan: An LBGT Trail Around the British Museum in which she points out a number of objects that trace the history of the gay experience.
This is also the International Year of Rumi, a Sufi mystic, and one of the world's greatest love poets. Here is an excerpt from one of my favorite Rumi poems:

If anyone asks you
how the perfect satisfaction
of all our sexual wanting will look,
lift your face and say,
Like this.

When someone mentions the gracefulness
of the night sky,
climb up on the roof and dance and say,
Like this.

If anyone wants to know what "spirit" is,
or what "God’s fragrance" means,
lean your head toward him or her.
Keep your face there close.
Like this.

When someone quotes the old poetic image
about clouds gradually uncovering the moon,
slowly loosen knot by knot the strings of your robe.
Like this.

[Please note: This article contains links to sites, books and pictures with adult content. I said "adult" not pornographic, by which I mean sites containing words of more than one syllable, which are frank, honest, and mature]

Skinny Legs and All by Tom Robbins. A book about belly dancing, Queen Jezebel, Astarte, and sea shells. I would also recommend Jitterbug Perfume, a book about beets, floral conscious and New Orleans. His newest book is Wild Ducks Flying Backwards.

Perfume: The Story of a Murderer by Patrick Suskind. Love and obsession in 18th Century France

Scents and Sensibilities: Creating Solid Perfumes for Well Being by Mandy Aftel.
A Year with Rumi by Coleman Barks

Additional Notes: 3/21 The Wild Hunt Blog offered a lovely post for Spring today. It's a nice collection of the well loved links on this subject and may include some you haven't seen yet - Check it out.
Posted by Dj Connell at 9:49 AM