Seasonal Silliness: Can We Find Harmony in Difference? 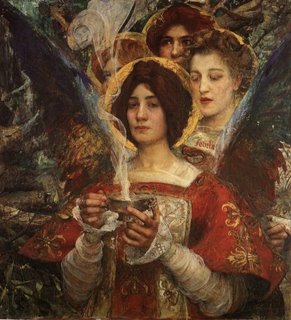 Tis the season to be silly....

They are fighting over Christmas Trees at the Seattle airport. A Rabbi saw their 14 decorated trees and asked for a Hanukkah menorah to be added to the display. In the spirit of peace and goodwill, airport officials said "Nope" and took down all the trees in the middle of the night. The Rabbi, horrified, said that this was not what he wanted. People complained, and now the trees are back up. A menorah may be added next year. Somewhere during the Christmas Wars, the dominant culture forgot that these trees are actually Pagan symbols.

This quote at Tolerance.org sums up the way I feel about this issue.

"Tolerance is respect, acceptance, and appreciation of the rich diversity of our world's cultures, our forms of expression and ways of being human. Tolerance is harmony in difference." (UNESCO)

"We view tolerance as a way of thinking and feeling — but most importantly, of acting — that gives us peace in our individuality, respect for those unlike us, the wisdom to discern humane values and the courage to act upon them."

I love the idea of “harmony in difference”. For those of us who are Sci-Fi geeks, it's very Star Trek.
Posted by Dj Connell at 10:36 AM

I wanted to share, also, my definition of tolerance: it's a conscious decision to live at peace with your neighbors regardless of their choices.

(I'm speaking in general terms here,of course--granted, there are some situations that should not be "tolerated" e.g., child abuse.)