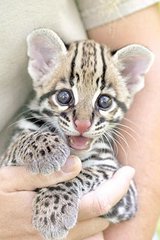 I was very sorry to hear (via Oregon Public Radio, yesterday afternoon) that the owner of Isis Oasis and her nonprofit group The Temple of Isis, have been fined $60,000 for conspiring to sell ocelots and falsifying government paperwork.

I stayed there on retreat with one of our council members in 2003. I loved the temple and our rooms at the lodge (which were beautiful and very comfortable). I also liked the pool and the grounds, but as a wildlife rescue volunteer I was very uncomfortable with the size of the cages they had for their wild cats. The volunteers there seemed to love the animals, but I did not believe the temple was meeting the physical and psychological needs that wild cats have for space, proper exercise, mental stimulation and interaction with others of their species. To abide by the letter of the (limited, muddleheaded) U.S. laws on caging is not the same thing as giving proper care to an animal; something I think any Earthwise person would consider. But there was little I could do beyond offering advice for larger caging. The property is extensive; they have the room to make such changes, but to my knowledge no such improvements have ever been made. The owner was also breeding ocelots with house cats and selling these as pets. I was not sure what long term problems the animals she produced would have. As a result, I never booked any of our Full Circle events or retreats there.

I'm very sad about this news. I know this retreat has many rescued animals and birds at their site, and that they did some good work with these. I hope that they can learn from this and turn things around, especially when it comes to caring for the African wildcats, ocelots, and other animals in their possession.

On the other hand, there is one organization out in California which works with wildcats which I can recommend wholeheartedly. They are Leopards, Etc.

It's legal to receive an ocelot as a gift, but illegal to sell one.

The government said the California non-profit organization temple of Isis' conspired to sell ocelots and falsified government paperwork. The group is charged with selling ocelots to purchasers in Oregon, Florida, Minnesota and Texas over the past five years.

The organization admitted its guilt, and agreed to pay a $60,000 fine.

A corporation called Great Cats of the World, based in Cave Junction, Ore., was also charged with an illegal purchase of an ocelot.

The Oregon Zoo weighed in the issue this morning (see story at link). As expected, they are none too pleased. (FYI: They are just about to open an new exhibit on animals in the rain forest, including ocelots.)

I met a few of these wonderful creatures when I was in Belize in '95. We saw one very close up at their amazing zoo (which is rightly built more for the comfort of the animals then the visitors) and we were fortunate enough to meet and hold a rescued ocelot kitten at another location in the rain forest. Sadly, we also saw one very miserable adult ocelot kept in far too small a cage (so people could see it, they said) at a fancy resort where we had stopped to have lunch. The cat's frantic and never ending pacing was a sure sign of desperation and unease. To quote Dr. George Johnson on the changes at the St. Louis Zoo:

(In days past) You could not leave a visit there without a lingering feeling of sadness. I can to this day see the cats there pacing back and forth, back and forth, in hopeless, mad, circles.

We made our views known to the management of that resort, of course, but there was little else that we could do beyond telling every travel agent we knew what we thought of that awful place.

(Note: If you are considering a visit to Belize, take a look at Chaw Creek, an eco resort and spa that sits on 340 acres of the rain forest near the Macal river. The owners of Chaw Creek care deeply about the land, the culture, the children and the wildlife of that country, and it shows.)

Ocelots are so very beautiful. I can see why people would desire them, but it's ridiculous to think that you can keep one as a pet, and cruel to try it. LV told us that she was breeding these endangered animals for zoos and other rescue organizations around the country. Apparently there was more to this story than we knew. Five people from the temple have now been sited for hiding the sales as charitable contributions to their nonprofit Pagan group.

(1) The yearly event they hold is called the Convocation of Isis ("Dedicated to the Goddess Maat: Goddess of Truth and Justice"). The convocation has this note in their 2006 convention calendar: The Rev. Loreon Vigne (Owner of Isis Oasis and Co-Founder of the Temple of Isis) will also introduce her autobiography, The Goddess Bade Me Do It.

8/5/2006. Updates: I sent the story to Jason at the Wild Hunt Blog and to Wren's Nest . on 8/4. Both have picked up the story. I have yet to see comments from LV herself or the Temple.

I also posted this note to my Pagan list:

I've never before criticized another Pagan organizer in public, as I do not believe in Witch Wars. The most I have ever done is used their actions as cautionary tales in my essays, and left names out of it. I knew I would break that rule if it involved the abuse of either children or animals. I broke that rule today: http://fullcirclenews.blogspot.com/

As Terry Practchett notes: "A witch speaks for those who cannot speak for themselves", and that includes these wild cats. Pagans who now book events at this place will have to ask some hard questions of the Owner, and not just play on the temple grounds....She, of course, has a right to tell her side of it. Lets us hope that she does. If so, I'll print that, too. Let us also hope that she cleans up her act for the sake of the other animals in her care.

The picture above is of Zeus, a baby ocelot, at 5 weeks old. He was born to parents who live in the Texas Zoo. The news story on Zeus comes from the Victoria Advocate and notes that "In Texas, ocelots once ranged in the South Texas brush country and the southern Rio Grande Valley. In 1995 there was an estimated 80 to 120 ocelots in Texas, with three dozen in the Laguna Atascosa National Wildlife Refuge near Brownsville."