I had the great good luck to attend a concert last night by the Wicked Tinkers, an incredible band, which plays traditional and original Celtic music like you've never heard it before, using didgeridoo and a bronze age horn, dumbecks and djembes, as well as the usual large celtic drums, bodhrans, Highland Bagpipes, whistles, mando cello and guitar. The four musicians gave us two and half hours of a vibrant, earthy, 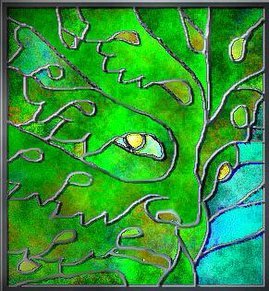 powerful music, music which had many people on their feet dancing for most of the night. The audience members (and their kids) were a nicely mixed lot, and I saw all sorts of moves out there; everything from jigs to belly dancing, all done in the isles and at the front of the stage. Discworld fans will understand me when I say that this is a band with rocks in, not to mention a fervent fan base.

I've decided to write an article about that night for The Witches' Voice. Since I'm not a music professional like Anne Hill, I'll write about that evening as an Pagan experience, as well as a concert gig.

I was lucky to catch them in such an intimate venue. They were in a town near us, doing a charity gig at the local Elks Lodge, before heading off for the Pacific Northwest Scottish Highland Games in Enumclaw, Washington, where 40,000 people are going to gather to hear them play. Lucky people.

I've heard a lot of Celtic bands over the years, and what I like best about the Tinkers is this: They take the music seriously, but not themselves. (1) These guys respect the ancient traditions and at the same time their playful demeanor on stage coupled with the witty, running commentary by the piper Aaron Shaw, gave their show a hip-yet-friendly, iconoclastic edge. The guys in Wicked Tinkers are four funny, joyous, talented wild men, and they are very happy to dance with a child, take a drink and to be among us. Why do they use a didgeridoo when playing Celtic music you ask? Their answer is "Because we like it!". Good answer. This isn't a gimmick but an intregal part of their sound. And what a sound it is.

And not for nothing, guys and gals, they've got the legs for those kilts.

One of the band members, Jay Atwood, is a practicing Pagan. All the guys are Pagan friendly but I knew from talking to their manager on the phone that afternoon that one of them was a very active member of our tribe. When I saw the handsome fellow with the shaved head wearing with the purple and blue kilt, leather jerkin and face paint, I figured I knew which one it was.

Jay and I talked between sets and we found that, although we have never met before, we have several good friends in the community in common. Jay's a very likeable guy not to mention a talented didgeridoo and percussion player and he was involved with the late, lamented Santa Cruz festival called Fire Dance. Jay is currently touring with WT and doing his own brand of fire alchemy out in Las Vegas. He also has a solo album out (I'm listening to it as I write this) titled Bonfire Dreaming. You can hear a cut from that album in the Bardic Section of Vox. I love it so much that it's going on my "What to give people for Yule" list. Ditto for the Tinker's albums, the titles of which are:

and these ae the lads in the band:

Catch 'em if you can. Their tour schedule is up on their website.

Note: The image used above is titled Ivy Greenman and the stained glass artist is unknown. I first used it to illustrate an article I wrote for Beltane titled In Praise of Pagan Men.