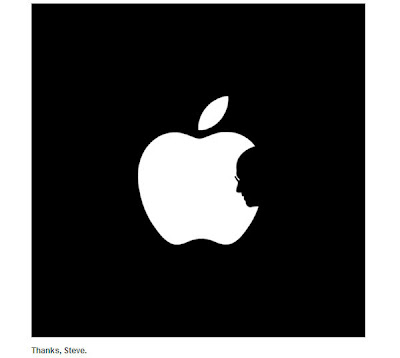 As I write this tribute on my MacBook Pro, I am reminded of what I tell everyone I know who is thinking about buying an Apple product:  "Remember how hard it is to date and how wonderful, easy and simple it feels when you finally meet the right person? Well, that's the difference between a PC and a MAC.  PC's are the ones who gave you so much grief and trouble and wasted so much of your time.  Once you've worked on a MAC you feel like you've found your true match; you are finally with someone who respects you and thinks like you do.  Trust me, you'll never go back.".

Today, while the world is considering the life of this man and mourners are creating impromptu memorials,  my 85 year old mother (who hated her old "smart phone" and would rarely use it) is rocking her iPhone, and sending me texts and photos on a daily basis. There again is the genius of Apple; it resides in the realm of connection.  Other companies made phones for 20 years and they were never, ever as user - and elder - friendly as the iPhone.   The ease of this enhanced communion,  through words, pictures and sound, is a grace note for both my mother and me.  Multiply that intimate effect by millions and we are closer to groking the enduring, world-changing legacy of this remarkable and very driven man.

As we consider the impact that Steve Job's life and work has had upon our own lives, it is useful to consider the metaphysical, cultural and literary thinking that influenced him. As Susan Donaldson James notes, his mantra, "Focus and Simplicity", was rooted in Buddhism.  She writes:


Jobs used Dalai Lama in one of Apple's most famous ad campaigns: "Think Different."
... Jobs could have just as easily taken his philosophy from the hippie movement of the 1960s. The Whole Earth Catalogue was his bible, with founder Stewart Brand's cry, "We are as gods."

The catalogue also delved into spirituality. In one 1974 article, author Rick Fields wrote that Buddhism is "a tool, like an alarm-clock for waking up."
That may have been the case for Jobs. He said in his now-famous 2005 Commencement speech at Stanford that he lived each day as if it were his last, admonishing graduates not to "live someone else's life."
"Don't be trapped by dogma -- which is living with the results of other people's thinking," Jobs said. "Don't let the noise of other's opinions drown out your own inner voice."

There are many reasons why Apple users loved him.  I think Chris Taylor said it best: Steve Jobs saved technology from itself.   I recommend his article; it gives us a vivid picture of the tech world if he had not existed.

Steve Jobs wasn't a perfect man by any means.  His verbal abuse of Apple employees is legendary and one hears very mixed reviews of what it's like to work there.  (1) As a eco-feminist, I have often wished - and said publicly - that his products could and should have been more green in their design, especially when it came to recycling. Thanks to a Greenpeace campaign and thousands of Apple fans, Apple's environmental record has improved.

There was, as Bryan Walsh notes in Time, a very dark side to Steve Job's dream.  Let us not forget that his innovative designs were affordable for us because they were made by poor people working low hours in terrible conditions for obscenely low wages in China.   A rash of suicides in one Apple factory there finally pushed both Apple and China to address the conditions of their workers but their record, their awareness and their response to such issues  remains mixed, at best. The company says it is working to improve conditions and become truly green.  Those who care for Mamma Gaia and her creatures are keeping their eye on their progress

Stories emerged this year that Apple's child labor issues in China had worsened.  Apple fans and the company Jobs founded would do well to remember that the tech revolution and a global economy means that we are all, now, citizens of the world.  What hurts one of us, hurts us all.  The linked article notes that Apple investigated these allegations and has since terminated it's contract with that company.

On the plus side, Apple is doing a great deal to make their products available - and useable by - people with disabilities.  They have been at the forefront of accessible design for decades and this includes the new version of the iPad.

Tonight, while Apple users and newspapers react to the the death of Steve Jobs,  I will light a candle for his spirit and will remember with gratitude that an Apple II allowed a humanities major entry into the male dominated, math wizard world of computers in the 80's. The skills I learned on this cranky and amazing machine have allowed me to make a living ever since.  Today his products enrich my life in ways that only a mind like his could have imagined.  Thank you, Steve.  Enjoy your next adventure.

What Steve Jobs Understood That Our Politicians Don't

Steve Jobs: The Power of Taking the Big Chance

(1) There is another way. It is called a servant leadership culture.

Job's Profile on Apple Logo: Image Credit: Jonathan Mak
Hat Tip to this website for the links to tributes