Rescuing Pets Matters: Notes from the Disaster in Japan 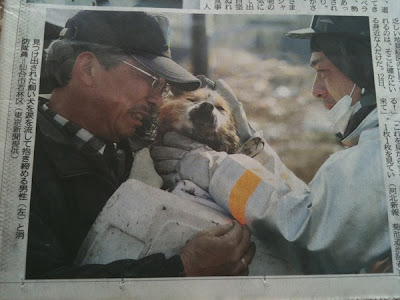 UPDATE 3/17:  Welfare groups race to rescue Japan's abandoned animals.
It is hard to believe that things could get worse but they have. Foreign evacuations have left many pets stranded.

World Vets is working with local groups - please give them what help you can.

This photo appeared in a Japanese newspaper on Sunday. It shows a Japanese fireman returning a little dog just rescued from the mud and rubble to it's owner. It reminds me how important it is to consider the animals caught up in this disaster. Rescuing beloved pets offers tremendous comfort to their owners who are suffering from trauma, grief and shock. It is well known that pets help their owners recover from PTSD (post traumatic stress disorder) the pain of which now haunts those who survived.

Let us not forget that the first responders are dealing with death and pain on a level that few of us can imagine. For them, seeing a survivor reunited with a loved one, whether that loved one has two legs or four, can offer a life-affirming moment of joy. For many of these volunteers it is the only reward they will ever have - or want - for doing this work.

UPDATE 3/15:  Japanese Rescuers Pull Together To Save Pets

One of the many important lessons learned after Hurricane Katrina is that making sure pets are safe and well-cared-for during a disaster can make it easier to evacuate their owners - a practice proven to save many human lives.

As Natlie Angier noted in today's New York Times, the Creature Connection is a part of our ancient past and runs very deep. She writes:

Researchers trace the roots of our animal love to our distinctly human capacity to infer the mental states of others, a talent that archaeological evidence suggests emerged anywhere from 50,000 to 100,000 years ago.

People are passionate about their companion animals ... (and) may even be willing to die for their pets. “In studies done on why people refused to evacuate New Orleans during Katrina,” said Dr. Herzog, “a surprising number said they could not leave their pets behind."

Japan has approximately 23 million pets and 17 million children under the age of 16. Please give them what help you can. (1)

If you would like to aid the animals and people in Japan I recommend donating to World Vets and/or Doctors Without Borders.


The Los Angeles Search and Rescue Team, and their 12 dogs, have just landed in Tokyo (having returned only a week ago from their mission in Christchurch, New Zealand) .

Let us hope that the Japanese bureaucrats who held up the work of search team and rescue teams from all of the world yesterday, keeping them caught in a mass of useless paperwork, are now a bit more cooperative.


Pearl's Story
Perl, a black lab rescued from a shelter in California, now works as a search and rescue dog. Her story has been turned into a book with illustrations from local school children. Sales from A New Job For Pearl will go to go help the search and rescue efforts in Japan.


Cat Island (AKA Tashirojima)
Cat lovers world-wide have been worried about Cat's Island. This tiny island is known for it's population of elderly fishing folks, it's cat shrine and it's many cats. (2) Cat Island is located off the coast of Japn, right near the epicenter, close to the mainland city of Sendai which was hit so hard by the tsunami. Word from a contact of mine in Japan and recent notes at the website Conscious Cats, seems to indicate that many inhabitants did indeed survive, although the dock is destroyed and the 70 elderly residents and the 100+ cats that live there are greatly in need of food, shelter and medical help.


Now, excuse me while I go hug my fur beasts. I will be offering more updates as news comes in on my Twitter page @birdgarden

In the past, the islanders raised silkworms for silk, and cats were kept in order to keep the mouse population down (because mice are a natural predator of silkworms). Fixed-net fishing was popular on the island after the Edo Period and fishermen from other areas would come and stay on the island overnight. The cats would go to the inns where the fishermen were staying and beg for scraps. Over time, the fishermen developed a fondness for the cats and would observe the cats closely, interpreting their actions as predictions of the weather and fish patterns. One day, when the fishermen were collecting rocks to use with the fixed-nets, a stray rock fell and killed one of the cats. The fishermen, feeling sorry for the loss of the cat, buried it and enshrined it at this location on the island.

Easing The Way With The Aid of An Animal

Time to Return the Favor to Japan: One of the World's First Responders.
Posted by Dj Connell at 10:40 AM