American Woman: Civil Liberties and the TSA Pat Down 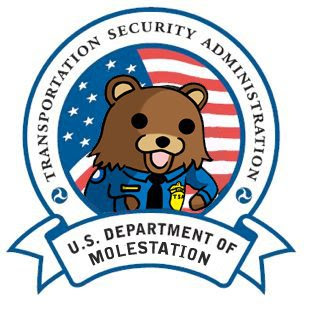 Our government thinks you don't care about the new TSA scans and pat down rules. They think you will allow any intrusion on your civil rights as long as the authorities tell you that it is necessary to "fight terror".

As a Pagan woman whose tradition has no problem with nudity, per se, I can stand to have this done to me when I travel but I completely reject the idea that my "choices" should be intrusion and radiation or being groped by strangers; all done on the orders of my government when I have done nothing wrong. Nor do I believe that TSA's newest attempt at security theater will make me one wit safer. So I plan to use my voice to protest this obscene violation of my civil rights.

All this makes me wonder: If a socially liberal, nudist beach loving eco-feminist like me feels that way, how must other, more socially conservative (or, if you prefer, modest) women feel about this intrusion? In one of the worst bits of irony to date in the "war on terror" we find our government "defending our freedom" against men who are infamous for the subjugation and abuse of women in every country where they have influence by subjecting women (and men) to sexual abuse here at home.

I keep thinking about these modest women, women who, however different their lives or world views might be from my own, I respect as human beings and might well enjoy knowing. So, here we are today: All women are now told by TSA that that if they don't like it, they don't have to fly. And why? Because patriarchal-minded extremists (both foreign and domestic) gain power from our fear. Really, TSA? Really?

Perhaps you are one of those people who believe that such measures (measures even security conscious Israel does not impose on travelers) are necessary, especially when dealing with foreigners and non-citizens. If you believe that anything goes in this fight, please imagine for a moment that it is you working as an hourly-wage TSA employee, performing sexually intrusive acts on American-born women like these:

* A Quaker nurse who chooses to wear modest dress, traveling to her work with AIDS patients in Africa

* A Hindu academic traveling to a woman's conference in Switzerland who is traveling with her 12 year old daughter.

* A Muslim pediatrician whose skills are urgently needed to help child refugees after the recent earthquakes, floods and famine in Pakistan.

* A Baptist social worker using her vacation time to bring vital burn medications to the hundreds hurt in the volcanic eruptions in Indonesia.

What have such women ever done to us that we would hurt them so?

These women are fictional, if plausible, examples of people traveling right now and they are offered here to make a point which is that good people are being hurt by this rule. Already one rape survivor has been traumatized by this treatment. As reported in Newsweek:

For women and men who have already been sexually assaulted, the new screening rules—or just the threat of these rules—present a very real danger. They can be triggering events, setting off a post traumatic-stress reaction...“After a sexual assault, it seems that many survivors have difficulty having their bodies touched by other people,” says Shannon Lambert, founder of the Pandora Project, a nonprofit organization that provides support and information to survivors of rape and sexual abuse. This fear of contact even extends to partners and, often, medical professionals. “A lot of survivors do not want to be in positions where they’re vulnerable. They put up defenses so that they can be in control of their body. In cases like this, it seems like some of that control is going away.”

I, for one, agree with those who argue that full frontal nudity does not make us safer and I have to wonder how parents feel about having their children subjected to either unnecessary radiation and/or intrusive handling.

Let me end with two questions:

* Are we as a nation, willing to hand over our dignity and our civil rights to the incompetent and untrustworthy officials at TSA?

* Will you trust that your own naked-as-a-jaybird scans won't end up on the net?

Somewhere the terrorists are laughing.

Nudity at Events: Our top 13 reasons why you can't always bear all

If enough people refuse to fly because of far-too-intrusive TSA searches, then the airlines themselves will bring the TSA to heel.

No passengers = No revenue.

FWIW, on TV (i think it was msnbc) they interviewed a former official with El Al Airlines who said he didn't think that the xraying and groping was an effective way to stop terrorists.