This someone you should know: Lorraine Margeson, Tampa Bay's best known environment activist; a woman working on the forefront of the gulf oil spill. Her story is compelling because she is not wailing or wringing her hands, she is not standing around feeling depressed or helpless about all this nor is she ranting on net about how bad it all is without doing a thing herself. Instead, she does what I think any one of us can do; she does the good that's in front of her: 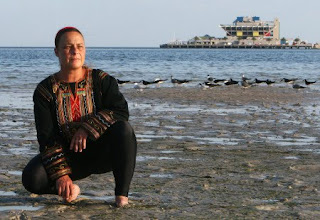 She and her husband built a three-story house with a bird-watching deck on the roof. They replaced plants from foreign lands with native vegetation. They joined Audubon, they joined Sierra, they became friends of whatever park needed them. On her block, she persuaded neighbors to stop killing rattlesnakes.

She and her husband have a computer hardware business. They would rather watch birds. They count robins. They see hummingbirds and cedar waxwings and the occasional rose-breasted grosbeak. They drive over to Fort De Soto to look at the warblers in the mulberry tree. Then they head for the beach, where Lorraine picks up trash and snarls at "idiots" who get too close to the endangered least terns that nest on the sand. She watches black skimmers. She never tires of watching the pelicans.

And now there's oil in her gulf. And it may end up here, on Lorraine's beach, where it might hurt Lorraine's birds.

So that's why she's on the phone today. That's why she is on the computer. She is networking with other people, leading their next move.

You can read the rest of her story here at Tampabay.com

More oil spill & environmental news can be found at BirdGarden
Posted by Dj Connell at 3:28 PM