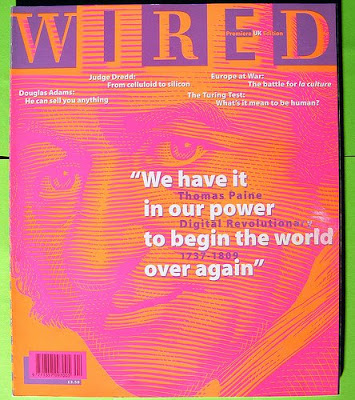 Now that the 4th of July fireworks and the parties are over and most of us are back to work, I'd like to take a look at Thomas Pain, one of the forgotten Founding Fathers, a man who still has a great deal to say to working people, including those in the earthwise community and among the digerati. In 1995 Jon Katz, writing for Wired Magazine called Pain "the moral father of the Internet" and went on to say:

...we owe Paine. He is our dead and silenced ancestor. He made us possible. We need to resurrect and hear him again, not for his sake but for ours. We need to know who he was, to understand his life and work, in order to comprehend our own revolutionary culture. Paine's odyssey made him the greatest media figure of his time, one of the unseen but profound influencers of ours. He made more noise in the information world than any messenger or pilgrim before or since. His mark is now nearly invisible in the old culture, but his spirit is woven through and through this new one, his fingerprints on every Web site, his voice in every online thread.

Recently Bill Moyers held a conversation with an historian and a journalist, one a Conservative and the other a Liberal, both of whom find much to admire in Thomas Paine. You can find both the video and the transcript of this fascinating program here. Below you'll find some excerpts from that conversation. But first, Bill Moyer's website has this to say about Thomas Paine:

More than two centuries ago, Paine's most famous book, COMMON SENSE, sold 500,000 copies. Farmers in the fields stopped to read it.

Other influential works followed including THE AMERICAN CRISIS which proclaimed, "These are times that try men's souls." George Washington took those words to heart when he ordered his troops to read Paine's passionate call for liberty as they went into battle.

Paine's extraordinary life was both glorious and tragic. He was not revered as some of our other founding fathers — and during his lifetime he was often feared and lampooned — and under threat of prison and even death. Harvey J. Kaye, who recently told his story in THOMAS PAINE AND THE PROMISE OF AMERICA, notes that Paine has again become currency in political debate because of a revolutionary idea that spread from the colonies to France and around the globe:

That the common people...that Americans could be citizens and not merely subjects. That people had it within themselves not only to listen to their superiors, but literally to speak to each other and deliberate and govern themselves.

...in terms of the democratic impulse, which never ceased in America, in every generation, progressive movements, radical to liberal, reached back to the American Revolution. And who did they rediscover? Oh, yes, they honored Washington, they honored Jefferson, but the words that they reprint...the words they reclaimed were Thomas Paine's.

Kaye goes on to state that

He was a visionary of democracy. He wanted to end slavery. He wanted to grant women equality. He wanted to abolish all property requirements for citizenship. He wanted a complete separation of church and state. He wanted to establish public schools and old age pensions...he (saw) the promise of America unfolding through the years.

...it's fascinating to consider that when Abigail Adams reads "Common Sense," she sends the letter to John Adams and says, don't forget. Remember the ladies. We can't trust you men.

And Adams writes back, knowing full-- and with a touch of affection, there's no doubt about it. He says, "Not you too." You know, the black slaves are rising in North Carolina, the students are rising in these Ivy colleges, Indians on the frontier, artisans in New York, something to that effect. Now, the biggest tribe of all is demanding this kind of democratic revolution.

...later, when (Pain) did come out of prison, he wrote "Agrarian Justice." And there he lays out a social democratic vision. That's where he says, "Let us create real opportunity for young people. And not give them a life of poverty. Let us tax the landed wealth, and use that money in some kind of community chest, a national treasury, to provide stakes...grants to young people, so when they reach twenty-one, and he said that of men and women, which was a very progressive thing to do at the time. And that way, they'll have a chance to, you know, buy land, gain an education, set up a small business. And we can also then afford pensions to the elderly. So, he did very much sort of look ahead to the idea, absolutely, of economic opportunity, but in a social democratic way, I think.

I found this exchange between the three men regarding Thomas Paine's views on organized religion (Paine himself was a Deist) very interesting in light of today's concerns (1):

RICHARD BROOKHISER: But I think the big sort of turn in his reputation and in his career had to do with the "Age of Reason," his great work after the "Rights of Man." And this is his full frontal assault on organized religion and particularly on Christianity. He's not an atheist. Teddy Roosevelt called him a "filthy atheist." He wasn't an atheist. But he was a deist, and he thought organized religions were frauds and impositions and lies and all the rest of this. And he lays this out at devastating length.

HARVEY KAYE: If I could just say, in Paine's defense, as a believer, that Paine believed that the creation was God's presence. I mean, he was absolute about that and repeatedly pushed the idea. If we want to worship God, then we should study the creation.

RICHARD BROOKHISER: I would say so. And I think one reason Jefferson was such a successful politician is that even though Jefferson shared a lot of these views, he didn't run around proclaiming them. Because he knew what Americans were, he knew what the electorate was. And he wasn't going to stick his chin out there in that fashion.

Want to be inspired? Then read/watch the entire discussion, and then go and read you some Paine.

Tom Paine's ideas, the example he set of free expression, the sacrifices he made to preserve the integrity of his work, are being resuscitated by means that hadn't existed or been imagined in his day - via the blinking cursors, clacking keyboards, hissing modems, bits and bytes of another revolution, the digital one. If Paine's vision was aborted by the new technologies of the last century, newer technology has brought his vision full circle. If his values no longer have much relevance for conventional journalism, they fit the Net like a glove.

Common Sense-a demolition job on the very concept of monarchy-swept America like an ideological firestorm. The impact was phenomenal. It sold 600,000 copies among a population of 3 million. And like Lincoln's "Emancipation Proclamation" 87 years later (Lincoln was a massive Paine fan), it turned a civil war into a righteous struggle for human freedom.

Without Tom Paine there would've been no revolution-and no America.

Wired, Weird and Wonderful
Thomas Paine and the Digital Revolution.

The radical Scottish lawyer Thomas Muir was sentenced to 14 years transportation to Botany Bay for the principal offences of recommending Paine's writings and for allowing a fraternal speaker from the the United Irishmen to address the Friends of the People Society convention in Edinburgh in December 1792. The trial judge, Lord Braxfield, told the jury that "Mr Muir might have known that no attention could be paid to such a rabble [of ignorant weavers]. What right had they to representation?" That was what Paine railed against.

(1) I had originally published more of their discussion on religion and Paine. On reflection, it seemed that I might be pushing the boundaries of Fair Use a bit too far in quoting to much so I've snipped several portions from that section. Again, I would recommend reading/watching the entire discussion between these civil, thoughtful gentlemen. Use the link I've posted above to get to Bill Moyer's website.

Thanks for the reminder. I certainly should brush up on Paine.