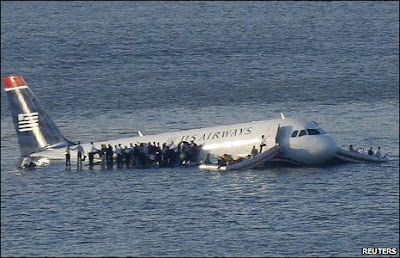 Like so many others, I watched the TV closely yesterday to see the fate of those on flight 1549. It was only later, sitting with my partner and discussing the crash, (1) that I realized what a lovely bit of poetic justice had just occurred; a story about a real hero (and an honest to gods pilot) had pushed the fake one off our collective stage. It seemed fitting that no one was paying much attention to President's Bush's last pathetic attempt to rewrite history; we had better things to think about.

My thoughts go out to the family and friends of those who survived that day and to all those who rushed in to help.

As the daughter of an engineer who helped design many of the safety systems on today's modern airplanes, including I might add, the inflatable evacuation slide you see in this picture, I would also like to tip my hat to the engineers and technicians involved; the men and women who design these planes to withstand just such incidents and who keep them running well so that you and I can come safely back to the arms of our loved ones. Kudos, as well, to the boat captains who responded so quickly, the coast guard divers who plunged into icy waters to help others, and to the plane's personnel and passengers who kept their heads and handled this terrifying emergency so well.

May courage like this come to you when you need it most.

There is another bit of poetic justice I would like to share. Almost 50 years ago to the day, my father, then a newly minted aerospace engineer, stood at the bank of the East River at night, in the bitter cold of winter, and watched crash experts carefully pull the bodies of fathers, mothers and young children out of the water after a passenger plane crash-landed in the water. Few survived that crash and even though reasons for the crash had nothing to do with him, I know that the sight of those families haunted my father in a ways that his experiences in WWII never did. (2) On that day he said to himself what hero's say in such cases, "This will not happen again, not on my watch". These are words we can take to heart as we move forward as a nation to fix what has been broken by those who betrayed our trust.

Photo: from the BBC, taken by a passenger on one of the boats who then helped several people to safety.

(1) As the daughter and wife of engineers in a family with a long history of producing all types of same (including aerospace, mining, electrical, mechanical and software engineers) on both sides, we take such stories pretty personally around here. Woe unto you if you produce a movie or a book and you get the science wrong.

(2) The crash was due to a small, technical design flaw which came to light that day on a plane that had been flying safely for years before my father even started his career. This is the sort of thing that keeps these men and women awake at night.

It's funny; I hate to sound like the Mustache of Understanding, but I was in a cab today in DC and my driver was telling me that, no, he wouldn't be making any money on Inauguration Day because, for the first time in his life, he was going to take off and watch the Inauguration. He said to me, "Mam, it's like that pilot yesterday. He was smart, and experienced, and he knew what he was doing. And he landed that plane safely. And Mr. Obama is like that. But Mr. Bush, who cares if you want to have a beer with him? He's reckless, and inexperienced, and foolish, and he's crashed our country into the ditch."

And, you know, I couldn't disagree with him.

:) as the daughter of a commercial airline pilot, ex-flight instructor, and a man who cared about his passengers, this was a superb landing. Almost impossible given the location ! I wonder if the flight crew had angels or ancestors along ?
Magical thinking perhaps, but sometimes we need miracles ...

I'm in San Francisco. That pilot was from the bay area and we're very proud of him! I never made the last synchroblog deadline but the piece I started then is done …it changed a lot, too. But I hope you stop by to visit at www.whenisisrises.blogspot.com. Take care. D~