Lunar New Year: The Year of the Earth Ox and Buffalo

Happy Lunar New Year to all here and welcome to the Year of the Ox.

Before we tuck into our feast, I thought I would post some information on this holiday.

Wikipedia on the Year of the Ox:

Here are some of the characteristics that come to the forefront this year; perhaps they come just in time:

The Ox is the sign of prosperity through fortitude and hard work. This powerful sign is a born leader, being quite dependable and possessing an innate ability to achieve great things. As one might guess, such people are dependable, calm, and modest. Like their animal namesake, the Ox is unswervingly patient, tireless in their work, and capable of enduring any amount of hardship without complaint.

... An Ox person has a very logical mind and is extremely systematic in whatever they do, though they have a tremendous imagination and an unparalleled appreciation for beauty. These people speak little but are extremely intelligent. When necessary, they are articulate and eloquent.

People born under the influence of the Ox are kind, caring souls, logical, positive, filled with common sense and with their feet firmly planted on the ground. Security is their main preoccupation in life, and they are prepared to toil long and hard in order to provide a warm, comfortable and stable nest for themselves and their families. Strong-minded, stubborn, individualistic, the majority are highly intelligent individuals who don't take kindly to being told what to do.

The Ox works hard, patiently, and methodically, with original intelligence and reflective thought. These people enjoy helping others...(more information can be found at the link above)

A 2005 article at SF Gate reminds us that Lunar New Year is a good time to clear out the old. I don't know about you, but I find it a lot more enjoyable to be clearing out the old since inauguration day.

While the Kitchen God is on hiatus in the sky, on Earth a flurry of cleaning takes place at homes and businesses.

For some it's the standard vacuuming and dusting, but, if possible, the windows and walls get washed, neglected corners behind refrigerators and stoves and furniture get cleaned out and closets organized. What's old and not useful is discarded, what can be saved is repaired.

But the star of the ritual is the broom, which, when used, represents sweeping out any residue of bad luck from the old year, to prepare for the new.

No cleaning, especially sweeping, will be done on New Year's Day when the Kitchen God takes his place by the stove again. No washing, for fear of washing luck away. Cooking for the New Year's feast is completed the day before and knives put away so luck won't be cut but instead will flow.

Here is some information on food and recipes for the celebration. 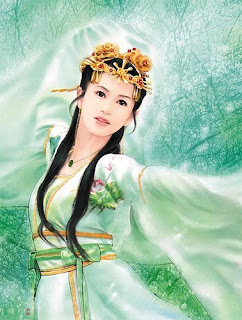 Many people in Asian cultures believe in the luck of the bloom:

"When the flower blooms, it brings prosperity," said Terese Tse Bartholomew, curator of the Asian Art Museum in San Francisco. "That's why you have to have blooming flowers on New Year's Day. No matter if you're rich or poor, you have to have it."

In Chinatown one recent afternoon, people could be seen clutching branches of pink-budding quince, trying not to poke their neighbors. Vendors haggled over prices with passers-by.

Red and yellow are the favored colors of flowers this time of year, representing luck and prosperity. Quince is used as a substitute for peach trees, which, as Bartholomew puts it, is the Christmas tree of the Lunar New Year. Peach trees represent longevity, Bartholomew said.

Oranges and tangerines, considered auspicious fruits, are also sold in large quantities during the Lunar New Year. A pair of mandarin oranges, together with a red envelope of money, is placed near the pillow of every child in the family, according to Bartholomew.

Energy for this year:

Evelyn Vincent at the Very Essence Aromatheraphy website writes this about the coming year:

The Year of the Ox, 2009, is symbolized by two elements – earth sitting on top of earth. According to the 5 element cycle of birth and destruction, which governs the inter-relationship between each of the 5 elements, earth and earth are like brothers and sisters, they do not have birth nor have a destructive relationship with each other. They can be friends and they can be competitors.

Therefore, earth sitting on earth is not a sign of conflict. The Earth on top is Yin (feminine) earth which symbolizes a garden, the garden gives sense of harmony, peace and relaxation. The Ox underneath is actually matching, the picture of a peaceful field with ox eating grass.

It is anticipated this elemental relationship will bring a year of more harmony and peace in international relationships - a year for healing and relaxation from the turbulent times the world has recently experienced. It is a time for rebuilding and reconstructions from the damage brought by war and natural disasters, and the financial tsunami of 2008, a time to seek peace, narrow the differences between different cultures, religious beliefs and begin to care for one another, and to make some achievement in solving the global warming issue. Thus, it is a year of pure earth element and the theme for this year should be caring for our planet earth.

The Chinese calendar year goes on 60 year cycle. This means that we have experienced the same year of yin earth on the Ox in 1949, a year when the world order basically settled down, a year when countries were healing from the devastation of WWII, a more peaceful and stable environment. Though it was still a time of confrontation between USSR and the west (USSR testing their first atomic bomb in August 1949) it was still a year of no major conflicts between nations, and a year of construction and rebuilding after WWII.

Those who are interested can check out their free western horoscope in relation to the Year of the Ox. Gotohoroscope.com notes that

Astrology is one of the earliest Chinese arts, most people in the West today are familiar with its 12 animal signs, but it has been influencing the lives of the Chinese centuries ago. Chinese horoscope is based upon philosophical or even mathematical conception of existence, though today it no longer plays such an important role in affairs of state, and yet it still absorbs the interest of millions of people all over the world.

Chinese invented a system named Jikkan Junishi (literally 10 stems and 12 branches). The 10 heavenly stems referred yin-yang principles and the elements of wood, fire, earth, metal and water. The 12 earthly branches included 12 animals: the rat, ox, tiger, rabbit, dragon, snake, horse, sheep, monkey, rooster, dog and wild boar. The 10 stems and 12 branches were used together to create a cycle of 60 two-symbol combinations. The complex calendar, called the sexagenarian cycle. Typically the calendar is depicted in a line, but when written out in a circle, the symbols are also used to note the time of day and directions. For example, the period between 11 p.m. and 1 a.m. corresponds roughly to the hour of the rat and points north. The horse indicates a two-hour interval around midday and points south.