Hurricane Ike's smallest victims are getting help from local wildlife rescue volunteers. WWR (Wildlife Rescue and Rehabilitation) is sheltering over 200 baby squirrels and one flying squirrel knocked out of trees by Hurricane Ike.

Baby squirrels (especially the smallest, hairless ones, affectionately known as "pinkies) have to be kept warm and fed every few hours, around the clock. As a wildlife rehabber, I've worked on a squirrel rescue team. Trust me, it's a lot of work. 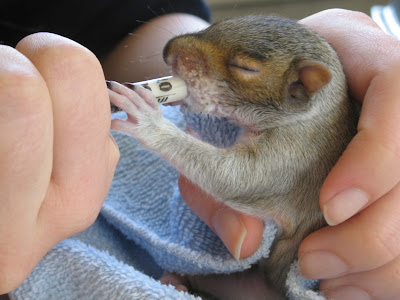 The Science Blog observes that:

We don't think about how wildlife fares during storms. But think about it. Many trees are taken down or damaged during storms and this forever changes the urban forestry landscape in an area. It is often the old trees that fall and do the most damage - the same trees that serve as historical and important shelter sites, food resources, territory boundaries, and ecological landmarks for urban wildlife. With flooding, animals retreat to trees or little pockets of dry land or rooftops. These dry places are little islands, often providing no shelter or food, forces animals to huddle in close proximity that they are not accustomed to. Fighting and predation often result. And the food is gone, drowned in water, and starvation becomes a reality.

WildBird on the Fly writes that:

An official with the U.S. Fish and Wildlife Service said Tuesday the tidal surge from Hurricane Ike has left a "sheen" of oil on a southeast Texas wildlife refuge, potentially endangering rare species of birds and other animals.

The Louisiana National Wildlife Refuge is closed due to damage from Hurricane Ike.

MYTH #1: Hurricanes won’t damage oil rigs. The U.S. Minerals Management Service estimates that Hurricanes Katrina and Rita destroyed 113 offshore oil platforms and caused 124 offshore spills for a total of 743,700 gallons. In fact, damage to offshore producers accounted for 77 percent of the oil industry’s storm costs. In the wake of Hurricane Ike, there are at least three offshore oil rigs missing and “presumed to be total losses.”

MYTH #2: Fish love oil rigs. McCain is pushing an oil industry talking point. While marine biologists have seen fish congregating around oil rigs, it doesn’t mean they are good for wildlife. “That’s like taking a picture of birds on a telephone wire and saying it’s essential habitat,” said the Environmental Defense Center’s Linda Krop. Without the platforms, fish would likely return to natural reefs.

The Dalles Morning News that an already fragile coastal ecosystem (fragile, thanks to us humans) could take decades to heal:

It was a violent dose of nature to a coast already hammered by decades of pollution, population growth and habitat loss. As scientists and land managers start to assess the storm's impacts on beaches, dunes and marshes, they are seeing signs of present damage and future worries.

...The Texas coast is crucial to an astonishing range of life, from fish and amphibians to the birds that stop over during migrations along the great Central Flyway from South American winter habitats to arctic nesting grounds. What happens to the dunes, estuaries and marshes along the upper Gulf Coast can be felt across the entire hemisphere for years.

Under natural conditions, coastal ecosystems adapt to the effects of hurricanes and even use them to flush out marshes and estuaries, changing water chemistry and plant communities.

Storms can restart the cycles of succession, or the natural rhythm of birth, maturity, death and rebirth in an ecosystem.

Coastal habitats also absorb storms' energy, a lesson made real in 2005 when Hurricane Katrina rushed ashore unimpeded by the former marsh that once protected New Orleans. The long, narrow strips of sand that parallel the Texas coast and the marshes behind them attempt the same role; they aren't called barrier islands for nothing.

Ike's storm surge threatened to take out in a few hours the dune buildup of years, and to drown under seawater the marshes that survive on a mixture of fresh and saltwater. The death of more marshes and the loss of the natural protection they provide is a certainty, experts said.

"These marshes were not in a healthy, dynamic state to start with because of human impacts," said Mr. Sutherlin, the wildlife area superintendent. Hundreds of acres, perhaps thousands, will be lost, he added.

When will we learn?

Here's to all the volunteers working around the clock to save pets, people and wildlife impacted by the storm.