Sacrificing To Serve - Honoring Our Citizen Soldiers in the National Guard 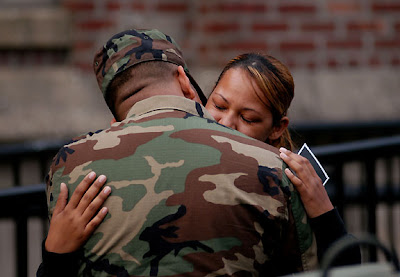 Last night, Bill Moyers offered us a look into the lives of the citizen soldiers serving in the U.S. National Guard in a segment called Sacrificing to Serve. If you go to the link above you can read the transcript and watch the video.

I came away from this program feeling deeply moved, and a bit more informed; perhaps you will, too.

The show profiled several national guard families affected by the war and I was touched by the story of young Sarah Ramos and her brother, Miguel. They reminded me of some of my students back in the day.

Ramos' commitment to the Guard was supposed to end this summer. He'd been away once before, and was ready to leave the service. But then came the Pentagon's controversial Stop-Loss Policy. Stop-Loss allows the Army to compel soldiers to remain in the military even though their enlistment period is expiring. So instead of getting out of the service, Ramos is going to Iraq. Sarah did okay during her brother's first deployment — but the news of this one has fallen on her like a stone.

I also discovered a personal heroine in Sergeant Beverley Curl of the New Jersey National Guard. Sergent Curl is a kind of Sekmet, a fiercely loving lioness, who uses her extensive talents and her huge heart in the service of her pride; the men and women of the New Jersey National Guard. She also serves and protects their families; people struggling to deal with loneliness, anxiety and economic hardship. In a way, Sargent Curl is walking the path of a far older (and to my mind, profoundly sacred) triple archetype; that of protector, counselor and priestess.

Here is a note from BMJ Blog: According to the Department of Defense there are 84,820 members of the Army National Guard and Army Reserve as of September 3rd, 2008.

Excerpt from Sacrificing to Serve

For six years now, America has found itself with too many wars and too few warriors, and so the Army National Guard has been called on to shoulder an unprecedented load. Of all the soldiers sent to Iraq this year alone nearly half are from the National Guard. Many of these 2,800 New Jersey guard are going back for their second, or third tours.


...When guard soldiers get deployed, their civilian salaries stop, and Army pay kicks in. But for a lot of those families, that means a considerable pay cut. For example, when Roy was in Iraq before, his Army pay was less than his combined income from those three jobs. So for the year and a half he was away serving his country, the Parks family say they had to absorb about a 25% pay cut.

Along with the responsibilities of work and family, domestic military duties also await many reservists. After a tour of Iraq, Louisiana's 256th BCT returned home to the aftermath of Hurricane Katrina. Almost one-third of them found their homes had been destroyed. Still, six hundred of them volunteered to remain on active duty and help recovery efforts...

As a high school teacher working in a low income area of Los Angeles I met a number of young men and women who felt that serving in the military was their way up and out of poverty, as well as a way to earn money for college. Some of my own college professors had served in the National Guard in the 50's and 60's and they remembered their service with pride and were grateful for the gains their service brought them. But times, and National Guard service, have changed. (1) My thoughts today are with the young men and women who are in harm's way, even as our government enforces a backdoor draft through stop loss, while denying them the health care, veteran's benefits and support they so richly deserve.

Watch this segment. You'll be glad you did.

The Elephant In Our Circles: Pagans, Tolerance and the War In Iraq

The "totems" or crests of the various national guard units. Those of you who appreciated imagery and symbolism will find these interesting.

(1) I am old enough now to have friends with children in the military. I watch them struggle with a surge of feelings; pride in their sons and daughters, hatred of the war, daily concern for their loved ones safety and furious anger at our government's callus and hypocritical treatment of our newest veterans, many of whom are Pagan.

Video: Rachael Madow on MSNBC on why the McCain Speech at RNC Skips All Mention of Veterans