Let Me See If I Have This Straight...Why Words Still Matter 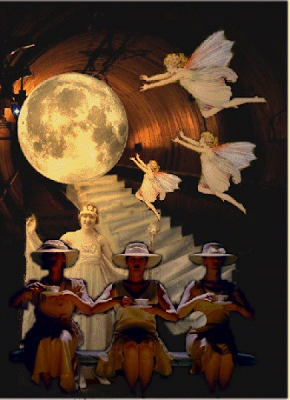 A little bit of insight called "Let Me See If I Have This Straight" has been going around the net, and I thought I'd share it. It reminds us why words (and the intentions behind those words) still matter.

When you're done laughing at that ditty (see below), I recommend reading Eve Ensler's article titled Drill, Drill, Drill and Gloria Steinem's article (written with the lucid wit and common sense that is her hallmark ) titled Wrong Woman, Wrong Message

I don't like raging at women. I am a Feminist and have spent my life trying to build community, help empower women and stop violence against them. It is hard to write about Sarah Palin. This is why the Sarah Palin choice was all the more insidious and cynical. The people who made this choice count on the goodness and solidarity of Feminists.

But everything Sarah Palin believes in and practices is antithetical to Feminism which for me is part of one story -- connected to saving the earth, ending racism, empowering women, giving young girls options, opening our minds, deepening tolerance, and ending violence and war.

I believe that the McCain/Palin ticket is one of the most dangerous choices of my lifetime, and should this country chose those candidates the fall-out may be so great, the destruction so vast in so many areas that America may never recover. But what is equally disturbing is the impact that duo would have on the rest of the world.

This isn't the first time a boss has picked an unqualified woman just because she agrees with him and opposes everything most other women want and need. Feminism has never been about getting a job for one woman. It's about making life more fair for women everywhere. It's not about a piece of the existing pie; there are too many of us for that. It's about baking a new pie.

Selecting Sarah Palin, who was touted all summer by Rush Limbaugh, is no way to attract most women, including die-hard Clinton supporters. Palin shares nothing but a chromosome with Clinton. Her down-home, divisive and deceptive speech did nothing to cosmeticize a Republican convention that has more than twice as many male delegates as female, a presidential candidate who is owned and operated by the right wing and a platform that opposes pretty much everything Clinton's candidacy stood for -- and that Barack Obama's still does. To vote in protest for McCain/Palin would be like saying, "Somebody stole my shoes, so I'll amputate my legs."

Let me see if I have this straight....

If you grow up in Hawaii , raised by your grandparents, you're 'exotic,

Grow up in Alaska eating mooseburgers, a quintessential American story.

If your name is Barack you're a radical, unpatriotic Muslim.

Name your kids Willow , Trig and Track, you're a maverick.

Graduate from Harvard law School and you are unstable.

If you spend 3 years as a brilliant community organizer, become the first

professor, spend 8 years as a State Senator representing a district with

over 750,000 people, become chairman of the state Senate's Health and Human

the Foreign Affairs, Environment and Public Works and Veteran's Affairs

committees, you don't have any real leadership experience.

If your total resume is: local weather girl, 4 years on the city council

as the governor of a state with only 650,000 people, then you're qualified

beautiful daughters, all within Protestant churches, you're not a real

If you cheated on your first wife with a rich heiress, and left your

disfigured wife and married the heiress the next month, you're a

If you teach responsible, age appropriate sex education, including the

proper use of birth control, you are eroding the fiber of society.

If, while governor, you staunchly advocate abstinence only, with no other

community, then gave that up to raise a family, your family's values

If you're husband is nicknamed 'First Dude', with at least one DUI

conviction and no college education, who didn't register to vote until age

from the USA , your family is extremely admirable.


Gif: From the Feminazi blog
Posted by Dj Connell at 8:10 PM