Jesus Was A Community Organizer 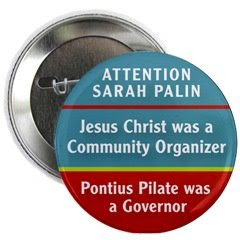 I was watching the news the other night when my partner (a Buddhist) walked into the room and said, "Someone should tell Sarah Palin that Jesus was a community organizer." (1) For that matter, so was Ghandi. So were Harriet Tubman, Susan B. Antony, Margaret Sanger, Mother Jones, and Dr. Martin Luther King. So is the Dalai Lama. (Now there's a celebrity) So are most of the parents I know, and many, many public school teachers (how else do you think they get those supplies when the state won't pay for them?). So are a treasured, hardworking handful of Pagans. (2)

I'll let Free Range Librarian have the last word on this:

As a Christian, I know Jesus was a community organizer. It’s hard work — he had a lot of trouble toward the end of his term of service — and it’s the kind of effort measured in agonizing small sips (not in honking big earmarks for projects you will later thrice disavow).

As a librarian, today I spent a few hours in a meeting with a lot of library directors present, and I was reminded all over again why I love libraries. It’s really extraordinary how this country supports its libraries. Not always, not as well as we’d like, but to a degree that underscores how much we believe in the power of communities. I also spent today in a gorgeous library that to me represented what democracy is all about: the chance for all of us to gather at the town pump to read, to discuss, and to celebrate our lives as thinking people.

(I won’t even get into her trickster behavior with then-director Emmons, and brava to Emmons for standing her ground back then, and taking the high road now. Been there, done that with the opportunistic censors.)

...So if you want to get me to the Obama phone banks this weekend to help get out the vote this November, just remind me how Palin mocked Obama’s community organizing. Because I guess a real job, to her, wouldn’t be at the payscale or prestige level of a community organizer, or a soldier, or a veteran. For all her anti-intellectual “gotta dress me a moose” postering, Palin’s not just a liar and a hypocrite — she’s a snob.

(1) (This is one reason why I have long argued that Pagans can and should work with Progressive Christians for social justice. As Wikipedia notes:

Progressive Christianity is the name given to a movement within contemporary Protestant Christianity characterized by willingness to question tradition, acceptance of human diversity (including the affirmation of gay, lesbian, bisexual, and transgender people), and strong emphasis on social justice. Progressive Christians have a deep belief in the centrality of the instruction to "love one another" within the teaching of Jesus Christ. This leads to a focus on compassion, promoting justice and mercy, and working towards solving the societal problems of poverty, discrimination, and environmental issues.

This movement is by no means the only significant movement of progressive thought among Christians (see the 'See also' links below), but it is currently a focus of such issues in many parts of the world.

The characteristics of Progressive Christianity, and its distinction from Liberal Christianity, have been articulated in an article [2] by Hal Taussig. These can be summarized as:

(2) For that matter, so was my grandfather, who was president of his local mining union in the 1930s; a turbulent time when that job could get you killed.

Good point :-) I think most people take that as read, which is a shame because it could be a very interesting discussion.

Douglas Oakman, says this in an article titled "The Radical Jesus":

"What was originally a radical social critique by Jesus and his
followers of the violent and oppressive political-economic order in the countryside under the early empire becomes in Luke's conception
a rather innocuous sharing-ethic ambiguous in its import for rural dwellers.... For Jesus, the kingdom of God was world reconstruction, especially beneficial for a rural populace oppressed by debt and without secure subsistence."

As a child, I was taught that Jesus took the poor, slaves, women, children, the sick and anyone else who was powerless, displaced and dispised, and helped them see themselves as worthy and deserving and a part of the divine. That sort of thing bring about change, as we all know.

As a Pagan woman, I know that journey. First you need to believe that you matter, to yourself and to others. Then you need to see yourself as part of a sacred and vital connection. Then, you can join with like-minded souls to create a better world. Ghandi took great inspiration from the teachings of Jesus to the poorest among us and used it in his work (without ever being a believer) as did Martin Luther King (who was, as we know, a Christian who took other Christians to task for not really living up to the teachings of Jesus when it came to confronting injustice. His letter from the Birmingham Jail is still one of the great pieces of writing on this point). If someone's teachings can span cultures and history in that way, it might just be of some value today. At the very least, we can say that he told truth to power and taught others to do so, which I believe is a worthy act. That said, it is difficult for people who believe he carried a worthy message, to tease out what he really said and taught from the bricks that were laid on top of that compassionate and progressive foundation by people like Paul and Luke and those who came after.

If there are lots of ways to reach enlightenment, then it stands to reason that Jesus is worthy of study by Pagans, even if we do not think (as I do not) that he ever intended to create Christianity as we know it today. I do not worship him as a god, nor do I believe that Christian "story" of his life written so many years after his death. Nonetheless, it seems that he gathered together and spoke to those who had no voice, and he taught them that such gatherings have power. As a community organizer myself, I can say that it fits the profile.

Thank you for the question. I would love to hear your own thoughts on this, especially since you have such a firm grasp of both history and politics.