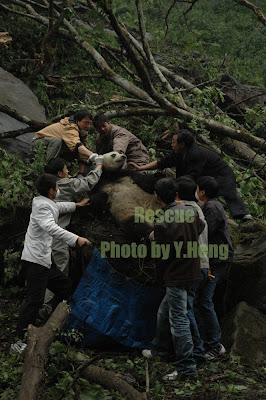 My thoughts today are with the people trying their best to help one another in the most difficult of circumstances. For an update on events in Asia, I recommend this article: Burma & China: Tale of Two Disasters.

More then just people are effected by this. Here is a (translated) note from a Chinese News service:

Wolong Giant Panda Research Center in Sichuan province, where is only 20 KM away from the epicentre was also attacked during the earthquake happened suddenly. Fortunately, most of pandas there were transported to safe place by the staff in time.

Bloomberg.com reports that the preserve - A United Nations World Heritage site - was cut off from help by the quake.

A platoon of soldiers parachuted into the park and is attempting to reconnect the road from there, Zhang said. More than 5,000 people live in the 200,000 hectare (494,000 acre) reserve, which has about 100 giant pandas living in the wild, according to the park's Web site.

Here are AnitaLee's pictures of the rescue operation at the Panda Preserve and here are more panda photos and further information from Kdrill on how you can help.

The UK Telegraph also has a detailed article on the Panda rescue.

The quake reportedly killed five staff members and destroyed or severely damaged all 32 of the reserve's panda houses.

And despite the massive operation some of the 1,600 pandas living in the wild in the Sichuan district remain missing, three of them on the world famous Wolong reserve which was just 20 miles from the epicentre of the quake.

Times are hard, I know, but if you can spare some funds, both people and animals in these regions need your help.