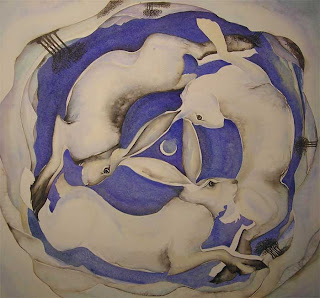 Waverly Fitzgerald at the School of the Seasons has a wonderful interfaith calender prepared for March, which she calls "the month of new life". Waverly's calendar lists March 31st, is listed as the day to honor "the moon, hares and rabbits". For more on this subject, I would recommend a lovely article by the Rev. Wren Walker titled There's a Rabbit In The Moon, And He Ain't Just Laying Eggs.

Here are Wren's thoughts on Rabbit As Teacher:

Throughout history stories of the rabbit, the bunny and the hare, have taught us lessons on how to adapt to strange conditions (They are especially adept at obtaining help from others), how to escape from the follies of our own actions (Cunning bunnies are very creative at both rescuing others and being rescued themselves.), how to pace ourselves (Rabbits leap only when they have to escape danger or are especially pleased about something.) and in general how to manifest the cunning, intelligence, ingenuity and outright brazenness that has enabled mankind to survive, adapt and learn from experience.

Rabbit makes mistakes because he is not afraid to try something new. Rabbit learns how to get out of the mess he often creates by using his wits. Then Rabbit often "tricks" us into a similar situation so that we can learn the lesson as well. And while tossing us down the bunny-hole, Rabbit initiates us into new experiences and levels of being.

I would also recommend a wonderful article by Terry Windling titled The Symbolism of Rabbit and Hares:

In Greco-Roman myth, the hare represented romantic love, lust, abundance, and fercundity. Pliny the Elder recommended the meat of the hare as a cure for sterility, and wrote that a meal of hare enhanced sexual attraction for a period of nine days. Hares were associated with the Artemis, goddess of wild places and the hunt, and newborn hares were not to be killed but left to her protection. Rabbits were sacred to Aphrodite, the goddess of love, beauty, and marriage—for rabbits had “the gift of Aphrodite” (fertility) in great abundance. In Greece, the gift of a rabbit was a common love token from a man to his male or female lover. In Rome, the gift of a rabbit was intended to help a barren wife conceive. Carvings of rabbits eating grapes and figs appear on both Greek and Roman tombs, where they symbolize the transformative cycle of life, death, and rebirth.

You might also enjoy Brer Rabbit in Africa and these notes on Manabozho, the Native American Trickster God.

The BBC website on Hares in Mythology notes that many European gods and goddesses are associated with hares (see the above link for a detailed list of those deities). The site notes that:

The hare is sacred in many ancient European traditions which associate it with moon deities and the deities of the hunt. In earliest times killing and eating the hare was taboo. In Kerry, Ireland, it is said that eating a hare was like eating your grandmother. This restriction was lifted at Beltane (Celts) and the festival of Ostara, (Anglo-Sacon) when a ritual hare-hunt would take place

.
The image I've used at the site today is titled Three Hares Running by the wonderful artist and children's book illustrator, Jacki Morris. Check out her website to see the list of books she has worked on, read her notes about making her evocative art and meet her cats, The Ginger Darlings.

Waverly's newsletter has this to say about St. Patricks Day:

The story of his dispelling the snakes from Ireland illustrates this shift in power, since the snakes probably represented the old oracle cults tended by snake priestesses. It is interesting that the snake handlers of Italy gather snakes on March 19th, when the snakes first wake from their winter lethargy and emerge. [Field] Helen Farias pointed out that Patrick acquired many of the qualities of Lugh, the ancient Celtic god of light, particularly his association with high places.


and I just loved learning about the imaginary St. Urho:

In Minnesota in 1956 a Finnish guest at a St Patrick’s Day party invented his own national saint, Urho (the name means “hero”), who supposedly drove the frogs out of Finland just like Patrick drove the snakes out of Ireland. The idea caught on and soon St Urho was the patron saint of Finnish immigrants and of Finnish vineyard workers, who drove grasshoppers out of the country. This exploit was honored in Menahga, Minnesota with a statue showing St Urho with a huge grasshopper on a pitchfork. The inscription on the base of the statue recounts a ritual which has been adopted and elaborated upon, in which people dress in green and purple, dance around with hopping movements like grasshoppers, and drink grape juice.

My friend, Patrick McMonagle, a folk dance historian, has not only invented but annotated a dance in honor of St. Urho:
www.folkdancing.com/Pages/StUrho.htm

She also has this a lovely note about Project Budbust.

I've heard that in the Midwest, Spring arrives as an explosion of flowers around Spring Equinox. I've always thought it crept up on us, here in the Northwest, with that first scent of sweet box and daphne odora in January, followed by snowdrops slowly unfurling in February, then daffodils in March, tulips in April, and so forth. But this year, this week, it feels like spring is exploding. I keep stopping on my walks to work, struck by the wonder of a shrub flush with green buds, where just yesterday there were only bare twigs.

We all go a little mad this time of year. Go safe - Have fun.

Hare Today: The Bunnies Are Back in Scotland

Rabbits This has a good section on rabbits in folklore and mythology.

Picture of the rabbit in the moon
from a page on the moon myths in different cultures.

Hare Sculpture by Brian Hollingworth. I love the one titled Hare Gazing At The Moon

Celtic Broaches - (check out the Three Hares broach)
Posted by Dj Connell at 11:32 AM