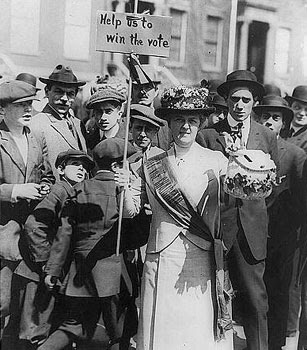 Here's what I find interesting: A Democratic woman - a lawyer, mother, fomer First Lady, and current U.S. Senator - is running for President and she's got a very good chance to win. Another woman - a professional journalist, mother and strong social advocate - has just publically announced her support for an African American candidate (who himself is married to yet another highly educated professional woman and mother) just one day after the journalist's husband, the Republican Governor of California, (a state so vital in this election when it comes to money and delegates it is known as as The Big Enchilada) has announced his support for a white, conservative male candidate in the other party. The First Lady of California stood on a stage next to her cousin - a well known author and an attorney who supports privacy rights. Next to her was one of the world's most famous and influential women; someone who grew up poor and black in the Jim Crow south and who has recently spent millions of her own money to open a leadership academy for young women in Africa Wouldn't the Iron Jawed Angels be proud?

My, oh my....this year just gets more and more interesting.

Speaking of which, today is the first day in which my friends Fyrehawk and D. can register their long term union as a Domestic Partnership in Oregon. (1)

What I wouldn't give to know Eleanor's thoughts on all this.

"Where, after all, do universal human rights begin? In small places, close to home - so close and so small that they cannot be seen on any maps of the world. Yet they are the world of the individual person; the neighborhood he lives in; the school or college he attends; the factory, farm, or office where he works. Such are the places where every man, woman, and child seeks equal justice, equal opportunity, equal dignity without discrimination. Unless these rights have meaning there, they have little meaning anywhere. Without concerted citizen action to uphold them close to home, we shall look in vain for progress in the larger world."

The Woman's Vote and the West

One Hundred Years Towards Suffrage: An Overview

Women & Spirituality: Festival of Brigid - post by Starhawk
A lovely piece about women and politics

(1) From the Associated Press:

Gay couples who register as domestic partners will be able to file joint state tax returns, inherit each other's property and make medical choices on each other's behalf, along with a host of other state benefits given to married Oregonians.

In 2004, about 3,000 same-sex couples were granted marriage licenses in Multnomah County, the largest county in Oregon. But Oregon voters later approved a constitutional ban on gay marriage, and the state Supreme Court nullified the marriage licenses.