From Coffins To Coffers 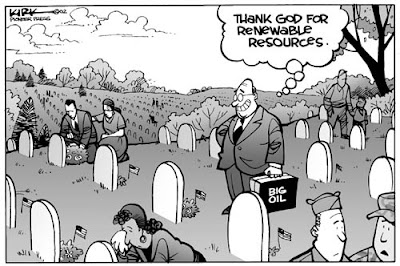 I am saddened that it is politically inconvenient to acknowledge what everyone knows: the Iraq war is largely about oil.
- Alan Greenspan, former Federal Reserve Chairman. Quote from his memoir (1)

From the very beginning of this war people were in the streets crying “No blood for oil!", while the American public and our allies were assured that this war was about establishing democracy abroad and protecting security at home. A recent article in Vanity Fair on the growing pile of Bush books by James Wolcott titled How Bush Stacks Up quotes Jim Holt’s piece for the London Review of Books titled It’s the Oil, Stupid to chilling effect. It shows that those who questioned the reasons for this war were right, and that the American people were sold a bill of goods from the very beginning. It was a very large bill, indeed. It is coming due right now and will take generations to pay. Holt's piece opens in this way:

“Iraq is ‘unwinnable,’ a ‘quagmire,’ a ‘fiasco’: so goes the received opinion. But there is good reason to think that, from the Bush-Cheney perspective, it is none of these things. Indeed, the US may be ‘stuck’ precisely where Bush et al want it to be, which is why there is no ‘exit strategy.’”

and Wolcott writes that:

Spreading democracy in the region was never the goal....The goal was to take control of Iraq’s oil resources and stand guard over its infrastructure, which is why military bases with world-capital-sized airport runways and suburban comforts are under boomtown construction in Iraq.

The draft law that the US has written for the Iraqi congress would cede nearly all the oil to Western companies. The Iraq National Oil Company would retain control of 17 of Iraq’s 80 existing oil fields, leaving the rest – including all yet to be discovered oil – under foreign corporate control for 30 years.”

The Vanity Fair article goes on to note this:

All in all a pretty sweet deal for the U.S. and trans-national corporations, paid for in part thus far by the sacrifice of nearly 4,000 American troops, and countless thousands of Iraqis, a necessary cost of doing business if you don’t mind having others get their hand bloody.

The Occupation may seem horribly botched on the fact of it, but the Bush administration’s cavlier attitude towards ‘national-building’ has all but ensured that Iraq will end up as an American protectorate for the next few decades. If the US had managed to create a strong, democratic government in an Iraq effectively secured by its own army and police force, and had then departed, what would have stopped that government from taking control of its own oil, like every other regime in the Middle East? On the assumption that the Bush-Cheney strategy is oil-centered, the tactics….are negligible compared to the #30 trillion in oil wealth, assured American geopolitical supremacy and cheap gas for voters. In terms of realpolitik, the invasion of Iraq is not a fiasco; it is a resounding success.

Wolcott ends his article by saying that:

Bush has no intention of marking time until the last tick of his presidency. He’s going to go out with a bang….Perhaps Bush’s post-presidential memoir should be titled From Coffin to Coffers, since he’s helped fill so many of both.

Why is the US Building Permanent Bases?
Friends Committee on National Legislation

(1) From Common Dream Newsletter: In The Age of Turbulence: Adventures in a New World, he is also crystal clear on his opinion of his last two bosses, harshly criticizing George W Bush for ‘abandoning fiscal constraint’ and praising Bill Clinton’s anti-deficit policies during the Nineties as ‘an act of political courage’. He also speaks of Clinton’s sharp and ‘curious’ mind, and ‘old-fashioned’ caution about the dangers of debt.
Posted by Dj Connell at 9:59 AM

And what's doubly sad is that anyone with half a brain could see this when it began,

Yes, and that the media did not do their job when it came to reporting these protests or questioning the lies that were told about this war.