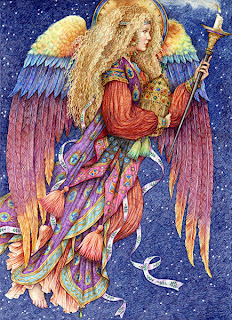 I called a gal pal the other day. We had a good talk. This woman and I have been friends for almost 30 years- how are we possible? In my own head, I'm still 23. The older I get, the more I cherish the strong, smart, funny women I'm blessed to call my friends. Mine you, I don't miss being 23. Give me the energy back, without all the angst, and I'll take it. Otherwise, no thank you.

In the midst of other news she told me that a old library colleague of ours had recently passed on from breast cancer. She was in her early 50's. L. was a good woman, who survived an abusive marriage and made a good life for herself, with the help of another old friend, M, who herself died far too young from undiagnosed heart disease, the number one killer of women in this country. As my sister used to say when she heard news like this, "Carpe f---ing diem!"

L. is fondly remembered by many people, both personally and professionally. She was a kind lady, and a damn good Librarian.

Next month will make it seven years since my sister passed from the same disease that took our friend, L. Areon was 43. I was reading her letters the other day, and was reminded again, that she was much the better writer. I miss her wit and her darkly funny take on life. And I miss her support. I wish I could have watched her fullfill more of her dreams. The older she got, the more centered, more interesting and more peaceful she got. At the same time, she became more passionate about the things she cared most about, like animals and the protection of wild lands. That's the best thing about getting older, you let go of more and more of the small stuff and focus on the things that really matter.

If, like me, you are the sister of someone who fought (or still fights) breast cancer, you may be interested in The Sister Study: A Study for the Environmental and Genetic Risk Factors for Breast Cancer.

The Sister Study needs at least 50,000 women to join the effort to find the causes of breast cancer. We are almost there, but we still need more women of all backgrounds, occupations, ages, and ethnic groups to join. In order for everyone to benefit from the results of this landmark breast cancer research study, we want to more than double the number of sisters enrolled from the following populations.

Stay heart smart, and get those breast exams!

Off the Shelf: Breast Cancer, Breast Health by Susun Weed

P.S. I've chosen to decorate this post with an art piece by Yvonne Gilbert (link below). Some people will see this as an angel, which is fine by me. I see it as a Spirit of Air or Light Bearer, and the image is made all the more significant to me by the use of rainbow or chakra colors. If you are interested in the concept of Angels AKA Messengers AKA Spirit Teachers from a Pagan point of view, check out the article titled Angels Explained by SpringWolf. (As always, folks, take what you need and leave the rest).

Let's start with the misconception that Angels are strictly Christian or non-pagan. They're not. Mythology of Angels existed long before Judaism and Christianity.

Angels also are major figures in Buddhism and Hinduism. Celtic and Norse mythology. And in many Shamanistic legends. But not all of these call these entities "angels", just like not everyone refers to a prayer as a mantra, or a spell of protection a prayer, and so on. We all have our "labels" for what fundamentally are the same things.

The Buddhist for instance refer to angels as devas, or celestial beings. Some paths of Buddhism use the label dharmapalas or dharma protectors. In Tibetan Buddhism, devas are sometimes considered to be emanations of bodhisattvas or enlightened beings. Other paths of Buddhism have specific important devas, as they are often derived from pre-Buddhist cultures and religions and not from Buddhist philosophy itself. So these paths encorporated pre-Buddhist local or regional mythology into their Buddhist paths long ago.

Hinduism has many different types of spiritual beings who act in a similar capacity to Angels. One example are the minor gods, or devas, refered to as the "shining ones". They inhabit the higher astral plane of the divine world. Gods, devas, planets like Sani (Saturn), gurus (teachers), and ancestors can all play a protective role for humans. The Asuras are also a component of Hinduism. They are also refered to as evil spirits or demons. They are fallen devas who inhabit the lower astral plane, the mental plane of existence. Much like the fallen angels outlined in Christian philosophy. If an Asuras does a good dead, they can be reincarnated into devas and do not have to remain eternally in the lower plane. Hinduism also includes Apsaras, who are heavenly nymphs, who preside over sacrifices, and lipika, who regulate karma. Devas and asuras can inspire or bring down aspirants, helping or hindering people on their spiritual journey.

In Norse mythology the equivalent angels are the Valkyries who were originally sinister spirits of slaughter, dark angels of death who soared over the battlefields like birds of prey, carrying out a warriors fate in the name of Odin. They chose the heroes of the battle and took them away to Valhalla, the heavenly home of honor for Odin's ghostly army. In later Norse mythology, the Valkyries were romanticized as Odin's Shield-Maidens, virgins with golden hair and snowy arms who served the chosen heroes everlasting mead and meat in the great hall of Valhalla. They also soared over the battlefield as lovely swan-maidens or splendid mounted Amazons. This was portrayed in the Volsung Saga and Niebelungenlied, where the heroine Brynhild was a beautiful fallen Valkyrie.

In Celtic mythology, the Faeries were often seen as the helpers of mankind. They too have many corrolations to their deeds as an angel would. There are a few lesser Goddesses which also acted as Angels; and perhaps that's why they're often refered to as the lesser Goddesses. Such as the goddess Sirona.

Art by Yvonne Gilbert
Posted by Dj Connell at 10:37 AM

I picked up my dear friend R., a gifted witch, this morning to take her for her masectomy. Lots of lymph nodes involved; we won't know how bad until next week. Another friend came to relieve me in the afternoon, but not until after I got to tell this wonderful artist, brilliant cook, and devout Pagan that, yeah, the cancer has spread. I hate this fucking disease. I just fucking hate it.

I'm so sorry to hear this. You and your friend will be in my thoughts.