It's Personal: One Pagan's Views On the Environment 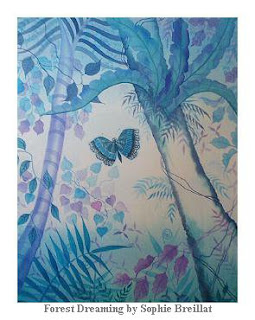 We Pagans do not have a formal concept of sin, as such, and we certainly do not have a Hell, but if we did, despoiling the environment would be a mortal sin, and there would be a separate and very special Circle of Hell for irresponsible developers and the politicians they keep in their back pockets. How would I construct that hell? It's simple. I would simply make them live forever in the places they have ruined.

I am a Westerner. Wide, open spaces are in my blood. I grew up in Southern California in a valley just outside of Los Angeles, in the 60's and lived there for 35 years. In my time there, the farms and open fields disappeared to be replaced by shopping malls, concrete and urban sprawl. It is now just called The Valley and the area became famous in the 80's for Valley Speak and Valley Girls, but when I knew it, the valley was a green and pleasant place. The deer and the cougar are gone from the hills, many of the hiking places I knew as a kid are gone, as well. One of my favorite parks, which was once a oak dotted haven for rock climbers, is now covered in graffiti and broken glass. As children we went with our parents to the coast. We danced on white sand and played in the gentle surf at some of the most beautiful beaches in the world. As teenagers, my friends and I built bonfires on those same beaches and gazed up at the moon. We did this in perfect safety. The sea water off the California coast is now toxic and filled with sewage, as are the river systems where my Dad taught me to fish. The public beaches that are left are overcrowded and unsafe. Beach access and beach views become more and more a privilege of the very rich, except, of course, when the million dollar homes they build in mudslide areas slide into the sea.

In the early 90's I moved with my husband to the Bay Area Northern California. During our 15 years there, we watched as what was once known as the Valley of Heart's Delight change into the overcrowded Silicon Valley we know today. Skies that were blue for much of the year are now more and more polluted. Unlike Southern California, much that was beautiful about the Bay was saved by devoted environmentalists. They preserved wild lands and some open space, even the development mad 1960's, a time when plans were made to pave even the wetlands near Palo Alto and turn them into shopping malls. As I said, much was saved by those who loved this area, and fought for it, but far too much was lost.

I saw great changes in my brief time there. During the dot.com boom, farms and open space were paved over to make way for huge high tech campuses. No thought was given to making green space or parks or wildlife sanctuaries in the 1990's. Housing was in high demand. The population soared, and tech growth and high paying jobs meant that money was no object. Thousands of new houses were built to handle the "sudden" population surge (a surge that had been predicted for this area for decades). Homes were built without any thought to issues like traffic, infrastructure, water or power or even flood plains (so look for more areas to slide down the Fremont Hills in the coming years). Areas, like Morgan Hill, a pleasant green place outside of San Jose, that tried to slow development was pressured by the state and disparaged by then Governor Gray Davis (Dem) for impeding natural progress. And then the cosmic chickens came home to roost. The Bay Area started to suffered their infamous rolling blackouts thanks to the good folks at Enron and the short-sightedness of our own civil servants. During that time, the dot.coms went bust, and those multi-storied high tech buildings that had been built with such hubristic intentions were never used. They lay empty for years. I hear that they have finally been pulled down to make way for chock-a-block condos and multi-storied homes. When I still lived there, such places cost the moon. The housing market has now tanked. Meanwhile, the developers who built such places are living in gated communities, where the wild lands and the unspoiled views have been preserved. It is only the public who must live in overcrowded, unlovely conditions and who fight the gods awful traffic every day. The rich are different from you and me. Steve Jobs still has a lovely view, while he continues to produce products the mount up in landfills. Increasingly, open space is a privilege, not a right. For example, if you want to visit one of the nicer wild areas in upscale Palo Alto (the place that brought us Google, and where all those Venture Capitalists live and work) you must show proof of residence. Otherwise you will be turned away.

Two years ago, work and family obligations took us to Western Oregon. We have a little place in the mountains, close to the Willamette Valley. It may be one of the most beautiful places still left in the West. Which is why the developers are eying it now.

Some years ago, Oregonians passed Proposition 37, which essentially overturned the land use protection laws that had been in place for so many years and which had saved Portland, and much of Oregon from the hellish urban sprawl that infects the other western states. 37 was deceptively worded and complex. Oregon voters had no idea what they had gotten themselves into until the timber, housing, and mining wolves moved in from out of state, and bought up family farms. They turned charming, livable areas like Medford, which lies in Southern Oregon, into a mirror image of the San Fernando Valley, the place where I grew up and rode horses and which is now a by-word for urban blight, pollution, crime and over crowding. Throughout the Medford area small wineries, open acreage, and family farms disappeared. Deer can no long roam the mountain sides, which were now covered in homes. More and more areas of open space disappeared to be replaced by enormous housing tracks, strip malls, shopping centers and traffic congestion. No new parks were built. No green spaces were set aside. No wise use plan was ever brought before the public, in fact, no real public discussion was ever had, at all. furthermore, No thought has been given in the last 6 years (and yes, that is all it took to make this natural heaven into a modern hell) to consider the needs of their wild ecosystem in one of the most beautiful areas in this state. As we took habitat away from wild creatures, we also ruined it for ourselves. No one gave a thought to what such crowding would again do to people when power and water began to be be scarce. "Wise use" is not a term developers use. They think in terms of how much and how fast, and the only green they know or care about is on color of the currency they wave in front of politicians who sell off our sacred environmental birthright when we're not looking.

Faced with the dilemma of Medford and other areas, Cascadians are now looking to overturn Proposition 37, and amend it this November with Proposition 49. All across the western states, voters are faced with the same sorts of issues.

But perhaps you don't live in the west, or perhaps you live happily in an urban area and don't feel you need to care. So let me tell you why you might care:

Water is a finite resource. As cities and towns grow, so does their need for water. Water will grow more scare, and become much more expensive in our lifetimes. And yes, wars will be fought over this, as they are in the middle east, wars that will involve all of us in one way or another.

As farm land disappears under the developer's heel, so too, does our ability to feed ourselves. We are faced now with two, linked issues that will become urgent in the coming years. First, we must be able to feed our own population in healthy, socially just ways, or face the issues we now have with oil: global blackmail from other nations, increasingly high prices and pollution on a massive and enduring scale.

Secondly, we are looking at increasing factory farms and loosing small family farms, not to mention viable farm land, across the nation.

We are choosing to have huge farms run by corporations that pollute the environment. They produce hormone laced meat under the cruelest possible conditions, and offer us pesticide laced produce. Such products add to the health crisis and the cancer rates in this country. Factory farms also pollute the groundwater, ruin the landscape for miles around and produce manure that threatens our health.

The readiness is all
- Hamlet
Former Vice President Al Gore was just awarded the Nobel Peace Prize for his work on the environment. Let us consider what that means. He did not win a science prize, he won the peace prize. That is because issues like food security, water rights, overpopulation, pollution, climate change and the resulting famine and floods it brings with it are issues of global war and peace.

As Mr. Gore said on receiving his prize,

We face a true planetary emergency.
The climate crisis is not a political issue,
it is a moral and spiritual challenge to all of humanity

Gore's portion of the prize money will benefit a non-profit organization he founded, The Alliance for Climate Protection. It is no surprise to me that this group would be based in the west, because we westerners have seen so much dramatic environmental change in our lifetime. For us, it's personal.

As a Pagan, I don't believe in the Judeo/Christian ideas of sin and hell, but I do believe in things like balance, right action and our connection to the earth. I believe that we are all children of Gaia and that what we do as individuals affects the whole. Decisions about the environment, development and wise use must be made with both current and future generations in mind. We cannot pave paradise and still expect to live there. It's just not possible.
Sia

Pagans and the Environment (The Wild Hunt blog)

Training as a Green Witch

Caring for Each Other, We Care for the Earth by NineRavens