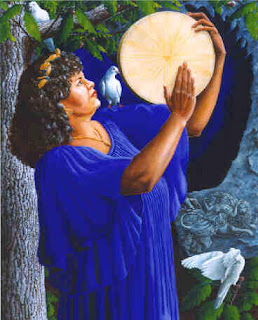 The Radical Origins of Mother’s Day:

In an article written for WorkingForChange.com, Gev Parish notes:

Julia Ward Howe called for the establishment of Mother's Day in 1870. Her gesture was intended not as a sentimental tribute to those who bear children, but as a call for women to wage a general strike to end war. (1)

Julia, a poet and suffragist, began her work to honor mothers as a radical act. We tend to forget that mothers are, and always have been, politically and socially active. Throughout history, they have used the wisdom they gained as mothers to think of future generations and work for the good of all. (2)

To be a mother is to cry and rage and worry and work till you want to drop. And most women do this without any help from any darn village.

Motherhood is both mind numbing and inspiring, frustrating and fulfilling. It’s a job worth doing and it takes a great deal of strength, wisdom, and self esteem to do it well. The many images of the Great Mother give us a sense of this. Her secret is contained within a paradox of seeming contradictions. She is both and equally, Kuan Yin and Kali, Isis and Morrigan, Aphrodite and Hecate, Lakshmi and Durga, Freya and Ha Hai-i Wuhti. In other, psychologically profound myths, she is portrayed as Medea, who destroyed her children in a fit of rage, and Lysistrata, who organized other mothers, stopped a war and saved two cities in the process. To see only one, sweet side of a mother is to ignore the complex, empowering truth of Her; a truth we can’t afford to miss.

Real mothers sometimes want to punch a wall. Instead they give hugs. They also teach, encourage, praise, and protect, and they do this creatively, day after day, no matter what. No wonder they simplified this holiday – it’s too hard to get all of that in one greeting card....

Some of us don’t have children (either by choice or by chance) so we honor the Creatrix. The Creatrix is connected to Gaia. She creates her own life as well as great friendships, arts and crafts, loving homes, beauty, peace, prosperity, and opportunities. She empowers friends and family and is, herself, empowered. She cares for others and she protects those who cannot protect themselves. She is a mistress of learning, knowledge, and culture. She has many forms including that of Artemis, Hestia, Athena, and Bridget. She can stand alone or with a partner. It’s her choice. We know her by the blessings that flow from her hand and the ideas that come from her mind and heart. This form of creation is worth knowing and honoring, as well.

[To read the full article, click on the link. The article also contains a bibliography]

The artwork that accompanies this article (and is copied above) is called Rhea. It is by Sandra M. Stanton. If you would like to see more of Susan's Goddess art, visit Goddess Myths. A portion of all sales from her prints goes to the Global Fund for Women. This image is used with her permission.