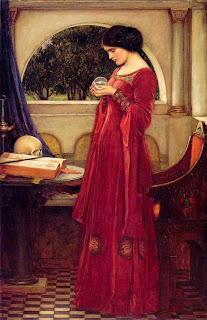 The Tipping Point: How Little Things Can Make a Big Difference by Malcolm Gladwell

Anne Hill wrote a wonderful essay called "A Peak Experience" which is about attending an event and hearing a chant used there that she wrote many years ago.

One of my favorite memories of MUSE Camp is the class Anne held on Pagan chants and songs in that wonderful Tibetan temple at Pema Osa Ling (then decorated with their 18 foot high Buddha and our four earthy Pagan altars in the corners). I loved watching Anne work, and watching her girls make art and play on the grounds and in the pool. Good days.

Her writing has reminded me again that, differences aside, I'm grateful to Starhawk and those others who, in the early, fragile, days of the movement kept the discussion of the divine feminine front and center long before it was ever trendy to do so. They dealt with ignorance, suspicion, and scorn, and made it possible for those of us who came later. We were then able to find Goddess-inspired art, spirituality, and language that we women could relate to. To share in the meaning of it all as sacred equals in the dance of life; can anyone who came of age in the 50's, 60's and early 70's forget what it finally felt like as spiritual seekers to realize that quest? And isn't that the point? Isn't finding meaning and connection at the very center of all we do?

If not for their work early on, Paganism could have been just another minor movement with an outdated, patriarchal focus or it could been left behind in some occult backwater instead of empowering and inspiring thousands of men and women (in a relatively short period of time, I might add) and influencing western culture in ways that have yet to be fully understood. Several historians (1) have noted the tremendous influence that these women have had on the Pagan, feminist, and ecology movements, and I think it is a fair (and necessary) point to make in this discussion we're having now.

The inclusion of men who fought to rise above their upbringing, as we had to do, and who brought their own unique creativity and energy to the party has also been invigorating and, for my part, most welcome.

For some time now, I've seen elements of Pagan thought, ritual and language entering into the zeitgeist and becoming a part of our cultural garden. (Read: The Tipping Point for a discussion of how such social change comes about). I can now talk about things like sacred space and honoring the seasons in one's life and raising girls with a sense of their own unique, spiritual place in the world with people who would never in their lives attend a Witch Camp. As you've noted, the discussion on much of what we hold sacred has now gone mainstream. The book Cultural Creatives is an excellent example of that:

The Wheel has turned radically since 2000. With such change, comes suffering, grief, challenge and renewal. We cannot deny or avoid this process but we can walk through that fire and come out stronger, more creative, more compassionate, deeper in spirit, more equal in relationship to others, and much, much happier.

What Pagans can do now is to ask themselves three very vital questions:

What Matters?
What Works?
What's Next?

The trick is not to fear the answers.

While Anne wrestles with her feelings about Reclaiming, I am coming to terms with the fact that Full Circle may never again offer events like our fabulous Witches Balls, our Beltane Balls or even another MUSE Camp. The Full Circle Council is discussing changing our focus as we speak. Our senior staff have done this work for many years now and we're tired. To be honest, we're not getting any younger. Also, I now live in Oregon while others have left or are leaving California. Some of us now have other calls on our energy, money and time. As a result, Full Circle may now move from organizing such events to advising and assisting other groups who want to do such work. Others among us want us to switch our focus to the mid-term elections and registering voters via the Pagan Voting Project, while others want us to focus more on growing Spiral Steps.

(1) Ronald Hutton being prominant among them. I recommend reading his book Triumph of the Moon: A History of Modern Pagan Witchcraft
Posted by Dj Connell at 9:54 AM