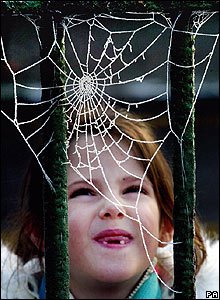 Bird by Bird & Traveling Mercies
both by Anne Lemott

I've just heard that a Pagan writer I've known for years might be moving to this area. It would be nice to have her here.

This gal published the very first Pagan focused article I ever wrote for print. The theme was Earthwise internet (when the Pagan was relatively new) and how the connections it allowed us to make related to the myth of Grandmother Spider.

Grandmother Spider has always been a particular favorite of mine. She is all about keeping the lore, making connections, and oversees the passing of knowledge down through the generations, especially among women. She is also a wonderful goddess for creativity and persistence (without which, creativey becomes mere wishful thinking). It may be time to think about Her, again.

I've also been thinking that it was time to get out the book notes (various) and see what I want to do with these. I may ask this friend about that.

I met a Pagan editor I really liked several years ago at PantheaCon. We started talking about a new made for TV movie called Iron Jawed Angels and went on from there. Three days later, we were still meeting and talking. She liked some of my ideas, and she asked to see some chapters. I was about to send these to her, when my father called to say he'd just been diagnosed with cancer. Well, everything else took a back seat to that, and I've been busy with family matters ever since.

Dad passed on a year later, and a lot of things have happened since. The things I want to say now are very different from the things I thought were so important three years ago.

In a way, I miss doing the newsletter because the deadlines it imposed kept my quill sharp. Is there anything the writer fears more then we fear the white page? We'll do almost anything to avoid it, I know that.

"I love writing but hate starting. The page is awfully white and it says,'You may have fooled some of the people some of the time but those days are over, giftless. I'm not your agent and I'm not your mommy, I'm a white piece of paper, you wanna dance with me?' and I really, really don't. I'll go peaceable-like."

At the moment, I'm reading Bird By Bird (a great book on writing) and Traveling Mercies, both by Anne Lamott. I did not think that I would relate to her writing or her world view but I find that I appreciate her dark sense of humor and her celebration of spirit. There are places where we disagree completely, and there are places where I find her writing to be both amusing and inspiring. I plan to read more of her books.

My own writing will have to wait. We'll be in Denmark for the Summer Solstice and after that, we go to Finland, Norway, Sweden and Russia. I'm pretty sure we're scheduled to see every Viking museum in every country that has one and all of this within 14 days. I can't wait.

Once we get back, I'll see what sort of writing I want to focus on next. It may be time to work on fiction or keep working on the Pagan community essays. We'll see. Grandma may have more for me to do.