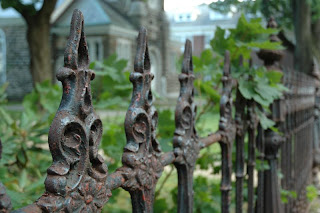 The subject of Fences keeps coming up and I'm trying to understand their meaning on several levels, including practically, socially and archetypically.

Like many people, I have struggled with the difference between having a healthy, empowered sense of Self and being self centered and self seeking.

I see this struggle in younger women I know and my heart aches for them. I'm watching my neighbor go through a downward spiral right now, and I'm reminded how much someone in deep depression is like an alcoholic. She is negative, deeply fearful, passive aggressive or outright hostile, pushing away those who care for her, filled with victim anger and rage and unconscious of it all. She has gained 30 pounds in just one year and isolates herself and her family more and more. She does not know how to grieve and so she isn't dealing well with the recent loss of her grandfather and step-father or her own health issues. She is also grieving the fact she tried to re-connect with her alcoholic father and found that he was the same as ever and worse. She is severe codependent and at the same time is completely obsessed with Self, to the detriment of her daughter, her husband and her relationships and her Highest Good. She is controlling what she can (like her husband and her contractor) and changing what she can (putting in a new, expensive fence she doesn't need) because she can't control the big things she's really afraid of (like death and loss) and she isn't ready yet to make the changes she needs to make. I think of both her and her daughter now as Persephone in the Underworld, and I hope for their release in time.

Like I always say: "You get a great view from a glass house." I remember my own travels through that dark and terrifying maze. I didn't not realize how awful my own depression was (something I went through for a full year, during during my Saturn Return , which began for me at age 28) until I'd made it out to the other side. When I look back now, it's amazing to me how deeply *selfish* I was in my 20's and early 30's when I give my Self away and how caring, usefully giving and compassionate I learned to be when I learned how to cherish my Self, set boundaries, deal with my emotions and take care of my own needs. Gods, I really love my 40's - it's a great Power Time for women.

I too, have had to grieve deaths of those close to me these last few years, and I've worked through personal losses and health issues as my neighbor is doing now. The difference between us is that I have a spiritual path that adds meaning to my life and sustains me in hard times, and I have spent years getting in touch with my issues and working through many of them. I also have Spiral Steps to go to with issues like this, and a very equal partner who works through own his "stuff", as well. Do I still fall into the pit sometimes? Sure. (She's not the only one who's gained weight from anger and grieving).....but I know the way out.

So, even though she is rude, negative, pushy, and very difficult to deal with I owe it (to her and to myself) to keep in mind the fact that she's fundamentally a good person going through a very rough patch. I work hard to keep a dialogue going. It's hard because she really is nuts right now and I don't like being around that energy. I have to be firm and polite at the same time. If I'm not, she will either pick a fight so she can be "right" or she will try and trample all over me in weird ways (like putting up a fence just when I'm trying to sell my house! (1). If I'm not careful she'll put up one that's illegally high or crosses over my property line, and blocks my sunlight to our second bedroom. But, you know what? It's good practice for me, boundary wise (pun intended). I'm not the Dali Lama; some days I just want to slap her. I do this for the sake of peace, for her daughter and for my own inner child, as well.

In a few week's I'm going to take her these books listed above. She's read the John Bradshaw book I gave her and she knows she's an ACA (Adult child of an alcoholic). Now, maybe, she will finally get it that her depression is killing her and hurting her daughter. I've set limits on what I can and will do, and I won't cross them, but I will do that good that's in front of me, and it resides in giving her information and then stepping out of the way. She will take what she needs and leave the rest. One never knows how a seed will sprout when it's planted. Years later someone can remember an idea they rejected at the time, an idea that once accepted can change everything. It happened that way for me and it might be that way for her.

I firmly believe that changing perceptions and setting clear intentions can change our personal world. I've found that to be true, especially these last six years. But that is a discussion for another time.

(1) At one point, she was so over the top that nothing I said could reach her, so at my request my partner (bless him) talked sense to her husband (a good, if codependent man) so we would not have builders here during our open house. My partner pointed out to him that selling our house quickly for a good price benefits their property values. That did it. She is now waiting to build the fence till we go into Escrow. We made sure that the new buyers (a very nice young couple) know that a new, extended fence is going in on that side, and they are fine with that. Now, I just have to make sure that she doesn't put up Berlin Wall when no one is looking!